A Forced-Air Warming blanket is a medical device designed to keep patients warm during orthopedic surgery and reduce the risk of infections. But these warming blankets, including the 3M Bair Hugger Warming System, may actually be causing infections. A number of 3M Bair Hugger injury lawsuits have been filed by patients who had hip or knee replacements and allege they developed Deep Joint Infections due to forced air warming blanket use. One patient who filed a Bair Hugger defective medical device lawsuit needed his leg amputated after developing infection following surgery.

Send your Bair Hugger claim to a lawyer who will review your claim at NO COST or obligation.
GET LEGAL HELP NOW 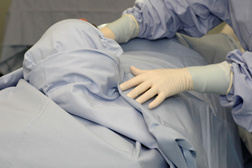 Forced-Air Warming blankets (FAW) work by pushing warm air through a hose into a blanket draped over a patient under anesthesia. Keeping a patient warm during surgery - —the Bair warming blanket is typically used during hip and knee replacement surgery - —produces benefits such as less bleeding and a faster recovery. But these blankets may also pose an increased risk of deep joint and other hospital-acquired infections such as sepsis and Methicillin-resistant Staphylococcus aureus (MRSA), which can both be life-threatening. The Bair Hugger warming system can allegedly pick up bacteria-contaminated air and blow harmful pathogens directly onto a sterile surgical site, according to the New York Times (Dec. 2010).

The Bair Hugger was invented by Dr Scott Augustine, an anesthesiologist, and the FDA approved the device in 1988. But Augustine in 2010 asserted that his device is a danger to surgical patients because the forced air can spread bacteria associated with hospital-acquired infections. (He has since designed and promoted another FAW.)

Complications stemming from infection allegedly brought on by use of forced air warming blankets can require the following treatment:

A study in 2012 published in the Bone & Joint Journal (formerly JBJS) regarding airborne contaminants linked the Bair Hugger warming system to an increased risk of implant infections.

The JBJS in December 2014 reviewed current literature involving Forced-air warming devices such as the Bair Hugger. The authors looked at many other studies and a Continuing Education statement by the Association of periOperative Registered Nurses (AORN) and "suggest that proper use of the forced air warming devices mitigates or eliminates this risk while maximizing the benefits of patient warming." 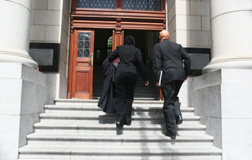 2013: A Texas man, 70-year-old Tommy Walton, had hip replacement surgery in 2011. His lawsuit against 3M and Arizant Healthcare Inc., —the Bair Hugger manufacturer and a 3M subsidiary,—claims that the airflow from the Bair Hugger device caused an infection that resulted in 15 additional surgeries and eventual removal of the hip replacement. The 3M Bair Hugger lawsuit alleges the air used by the device was discharged under the surgical table, picked up germs that rose with the heat and blew them directly onto the hip replacement device.

3M Company and Arizant Healthcare, Inc.. have also been accused of negligence by:
Walton is seeking more than $1 million in damages.

March 2014: Timothy Johnson had knee replacement surgery at the University of Kansas Hospital in September 2010 and subsequently developed the antibiotic-resistant infection MRSA. His leg needed to be amputated. Johnson's lawsuit claims that air from the Bair Hugger system "creates warm, rising, airflow currents that deposit bacteria from the floor of the surgical room into the surgical site."

Rosie Bartel also developed a MRSA infection after knee replacement surgery. She is now in a wheelchair after enduring 11 more surgeries and having part of her leg amputated. According to her lawsuit, Bartel also lost her home and her job.

The single-use Bair Hugger blankets and gowns were used in 22 million surgeries in 2012. Arizant Healthcare Inc. was bought by 3M in 2010 for $810 million.

If you or a loved one has suffered similar damages or injuries, please click the link below and your complaint will be sent to a lawyer who may evaluate your claim at no cost or obligation.
Please click here for a free evaluation of your Bair Hugger claim
Last updated on Oct-5-22

Gabriel Assaad has filed lawsuits against 3M and Arizant Healthcare (3M acquired Arizant in 2010) on behalf of patients who developed periprosthetic joint infections (PJI) after undergoing joint replacement surgery where a Bair Hugger warming blanket was used. If you had a knee or hip replacement surgery, suffered an infection and required additional surgery on your implant, you may be entitled to compensation. READ MORE
Last-Ditch Effort for 3M Bair Hugger Appeal

3M has asked the U.S. Supreme Court to grant a review of the U.S. appeals court decision to reinstate close to 6,000 Bair Hugger lawsuits claiming the warming blanket used in surgery results in knee and hip infections. In August 2021, the US Court of Appeals for the Eighth Circuit revived the lawsuits. READ MORE
FDA Clears Bair Hugger for Post-Surgical Use

Washington, DC: 3M’s , Bair Hugger, the subject of some 2600 defective products lawsuits across the US, has received clearance for use from the US Food and Drug Administration (FDA). According to a spokesperson for the FDA, the agency has no conclusive evidence to establish an association between use of a forced air thermal regulating systems and an increased risk of surgical-site infections. READ MORE

Posted by
Beverly Holm Jarshaw
on February 7, 2022
I had a knee replacement about 4 years ago and it cracked 6 weeks later which was odd. It did not become infected I do not think. Anyway I went to the Des Moines doctors Iowa City the Mayo clinic. And I now have a fatal knee the doctor did not redo it he just cut half of it out and shoved it up there and cemented it the other doctors around do not agree with what he did because now when it goes I'm either going to be permanently in a wheelchair or amputee it is fatal and I tried to make appointment my doctor did he said see the doctor that did this. And I said no he's mad at me and I'm mad so he made an appointment and I did not know who this doctor was but he's a partner with the guy that operated on my knee twice and they would not take me they said I am boycottage from a big business because the doctor does not want the other doctors to see my x-rays. And now I'm completely injured and I'm boycotted. Thank you
Posted by
Tom Sweesy
on June 4, 2017
Is there any research out there on the rate of infection NOT using the bair hugger warming device or using any other device to keep your body warm during surgery?
Posted by
Herbert Cox
on March 17, 2017
To much to text for me same as Walter same as Kathy meschan, and also Tony all three combine, there's no de about it,its true device cause infectiom,its been six years since total knee replacement and I really feel like I'm going to still die from it. Posted march 16 2017
Posted by
Jonathan Hurley
on March 10, 2017
A pickup truck went right through in 1976. The entire left side of my body bore injuries, among these a compound fracture of the neck of the femur. Two separate open hip reductions with a screw were required to hold the head of the femur in position. After 90 days, I left the hospital to walk on crutches for 2 years. No issues with infection. In 1995 I required a hip replacement. Again, no issues with infection. Then 2013 I received "revision" surgery to replace the worn components. An infection produced a hematoma the size of a football over the surgery site. Surgery was performed to eradicate the infection. IV antibiotics, wound vacuum, etc. Released only to have the infection again. Surgery again with same process. Infection continued. A fourth surgery to clear the infection failed also. I was asked to have my entire femur removed (to remove the source of infection) but was told I would be bedridden for as long as 6 months. I declined and am now on a regimen of oral antibiotics. The continuous use of antibiotics present issues of their own.
So, 3 prior surgeries of hip reduction in the same area had a successful outcome. Introduce the Bair and an infection occurred. And these statistics do not lie. I drove my surgeon crazy just asking "Why?" The INVENTOR of the device is on record and says it causes infection.
God forbid you find yourself harmed and need to resort to tort law. I was healthy and in great shape. Really looked forward to enjoying my retirement. Swimming, sailing, scuba diving, traveling, bike riding and golf were on my daily agenda. Now, I can't even walk. I aged 25 years in 6 months. I would have happily endured the cold of the OR to be healthy today. I did well the first 3 times.

Posted by
kathy meacham
on November 15, 2015
i had a total knee replacement done in 2006 and they used that in my surgery as well ! i went to recovery at a convalescent hospital i had gotten an infection in my leg that sent me right back to the hospital and sent home on a pick line with heavy antibiotics and my knee never healed right !
Posted by
C.R.
on October 28, 2015
Calvin, I feel your pain. I've had a total of 5 Total Knee Replacements ending with one leg amputated. Due to all the antibiotics by IV I have moderate/heavy kidney damage. The Dr's could never give me an explanation of why all the knee surgeries became infected within 6 months. I'm now out of work and damned near broke all the while stuck in a wheelchair.
Posted by
Otis. Young
on October 13, 2015
They this blanket on me when I had. A total hip replacement surgery/revision/ in 6/27/012.
Posted by
Linda C. Miller
on October 9, 2015
I was placed in Bair Huggers during both of two emergency abdominal surgeries in one week. I developed what all of the medical people referred to as a "surgical MRSA" that I battled for 8 mos. The second emergency surgery was the result of the first one. Why do I not find information about Bair Hugger's causing infections other than in joint replacement surgeries?