In February, 2010, the US Food and Drug Administration (FDA) issued a warning about the risk of certain Asthma inhaler side effects. There is now a Serevent and an Advair black box warning, alerting patients to the risk of using those medications. Furthermore, patients are warned to be on the alert for Foradil side effects, which can include worsened breathing. The FDA warns that patients using a certain class of asthma drugs—Long Acting Beta Agonists—should follow specific recommendations to reduce the risks of adverse effects.

Send your Asthma Drugs claim to a lawyer who will review your claim at NO COST or obligation.
GET LEGAL HELP NOW 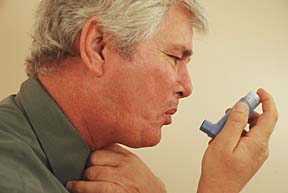 According to the American Lung Association, approximately 23 million Americans have asthma, chronic inflammatory lung disease in which airways are blocked or narrowed and breathing becomes difficult. Allergic asthma occurs when the symptoms—wheezing, breathing difficulties and coughing—are caused by an allergic reaction to an inhaled allergen. Non-allergic asthma occurs when the symptoms of asthma are caused by an inhaled irritant.

Drugs known as Long Acting Beta Agonists (LABAs) are often used for long-term asthma control. They work by relaxing the muscles in the patient's airway and lungs, allowing the patient to breathe easier. Serevent and Foradil are LABA-only asthma medications, while Advair and Symbicort contain LABAs and inhaled corticosteroids.

In February, 2010, the FDA issued a warning concerning the use of LABAs. The FDA's warning urged physicians to move patients away from the use of medicines that contained both LABAs and inhaled corticosteroids. Furthermore, the FDA recommended that patients whose asthma is only controlled by the use of LABAs should use the LABAs for the shortest time possible and should only use the LABAs in combination with inhaled corticosteroids.

The FDA announced the warning after clinical trial data suggested a link between the use of LABAs and an increased risk of severe exacerbation of asthma symptoms that lead to hospitalizations and, in certain cases, death.

A US FDA advisory panel voted unanimously that Novartis' Foradil asthma medication, marketed by Schering-Plough Corp., should have a warning regarding the risk for worsened breathing. Furthermore, Foradil's label includes a warning that Foradil Aerolizer should only be used for patients whose asthma is not adequately controlled by other medications or whose disease severity clearly warrants treatment with Foradil Aerolizer. The warning also notes that the results of the salmeterol studies may also apply to formoterol.

Recent studies have found that patients who inhaled the long-acting beta-agonists Serevent and Advair (salmeterol) or Foradil (formoterol), were 3.5 times more likely to die from asthma. Apparently, while these drugs relieve asthma symptoms, the medication also creates bronchial inflammation, which can lead to death.

Serevent and Advair manufactured by GlaxoSmithKline. Schering Corporation, which is a subsidiary of Merck & Co., Inc., is the exclusive U.S. marketer and distributor of Foradil, which is manufactured by Novartis.

According to astrophysicist Edwin Salpeter "We can show that overall it is statistically significant that, compared to patients taking a placebo, these long-acting beta-agonists kill a lot of people."

Shelley Salpeter, clinical professor of medicine at Stanford's School of Medicine confirms: "We estimate that approximately 4,000 out of the 5,000 asthma deaths that occur in the U.S. each year are actually caused by these long-acting beta-agonists, and we urge that these agents be taken off the market."

A study conducted by Shelley Salpeter and published in the Annals of Internal Medicine (06/20/06) concluded, "[Long-lasting Beta-Agonists] have been shown to increase severe and life-threatening asthma exacerbations, as well as asthma-related deaths."

And more tragic, most of these asthma deaths are otherwise healthy young adults.

If a loved one has died while using Serevent, Advair, or Foradil, you may qualify for damages or remedies that may be awarded in a possible lawsuit. Please click the link below to send your complaint to a lawyer who will review your claim at no cost or obligation.
Please click here for a free evaluation of your Asthma Drugs claim
Last updated on Mar-24-10

Parents concerned about asthma medication side effects in their children may be in luck, as a newly discovered white blood cell has shown potential as a treatment for the bronchial disorder. READ MORE
Safety Requirements for Advair and Other Asthma Medications Changed

The FDA has announced that it is changing the safety requirements for asthma medications, including Advair. The affected medications are Long-Acting Beta-Agonists (LABAs) sold as single-ingredient products (Serevent and Foradil) and as an ingredient in products that contain inhaled corticosteroids (Advair and Symbicort). These medications are used to treat asthma and chronic obstructive pulmonary disease (COPD). READ MORE
A Near Fatal Asthma Attack Possibly Caused by Serevent

Mary is asthmatic. She had been taking Serevent for about 18 months when she had a near-fatal acute asthma attack. Her regular inhaler didn't help, where normally it would have. She started losing her breath, and her ability to speak. Her husband called 911 and she was rushed to the emergency room at the nearest hospital. READ MORE

Posted by
lynn
on November 14, 2016
got permanent central serous retinopathy and chronic iritis after using advair about 15 yrs. ago
Posted by
New Jersey
on August 13, 2007
I was only 53 and no significant vision changes prior to taking. Eyes so good in vision with hardly any changes in six prior years and was a candidate for Lasix. I started the drug in March, saw the eye MD in may and by Oct. vision was blurry in both eyes, right worse. Have had one cataract removed (rt) and complications and scarring, and need another removed (left eye). Now on ads they say "some eye problems could occur". You bet!