If you want a healthy baby, government agencies in both Canada and the United States warn that you might want to quit taking Zoloft during pregnancy. Last year, the U.S. Food and Drug Administration and its Canadian counterpart, Health Canada, both issued warnings about combining Zoloft and pregnancy. 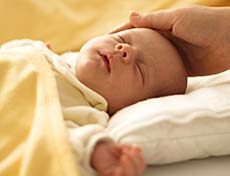 "The background risk of a woman giving birth to an infant affected by PPHN in the general population is estimated to be about one to two infants per 1,000 live births," continues the alert. Babies suffering from PPHN do not receive sufficient oxygen in their blood. It is estimated that one in five newborn infants with PPHN will die—even if they receive immediate treatment.

Manufactured by Pfizer, Zoloft is designed to ease the symptoms of depression, obsessive-compulsive disorder, panic disorder and post-traumatic stress disorder. It falls under the drug family known as selective serotonin reuptake inhibitors (SSRIs).

The Canadian government issued its own warning about Zoloft last March, 2006: "Health Canada is advising women who are taking antidepressants known as selective serotonin reuptake inhibitors and who are pregnant or intend to become pregnant to discuss the situation with their doctor, due to potential risks to the baby." It also states that SSRI treatment should only be continued if the benefits to the individual patient are thought to outweigh the risks to the unborn child.

The FDA and Health Canada both cite a study, published in the February 9, 2006 New England Journal of Medicine. The study examined 377 women whose babies were born with PPHN and 836 women with healthy babies. The study, which lasted from 1998 to 2003, involved four separate U.S. cities. It concluded that infants born to women who took SSRIs after the 20th week of pregnancy were 600% more likely to have PPHN than infants born to non-SSRI taking moms.

More News
"These data support an association between the maternal use of SSRIs in late pregnancy and PPHN in the offspring; further study of this association is warranted," reads a backgrounder on the study.

Zoloft is currently classified as a "pregnancy category C" drug by the FDA. This means that animal studies have indicated the drug might cause harm to fetuses, but that it's still okay for humans to take: "Potential benefits may warrant use of the drug in pregnant women despite potential risks" reads FDA literature.

The FDA is currently gathering information from additional sources to determine a potential association between SSRIs and neonatal PPHN and says it will provide additional information when it comes available. In the meantime, the FDA recommends that physicians "carefully consider and discuss with patients the potential risks and benefits of SSRI treatment throughout pregnancy, including late pregnancy."

If you took Zoloft while pregnant, and delivered a baby with heart defects, please contact a [Zoloft] lawyer who will evaluate your claim at no charge.
Request Legal Help Now