Anyone who has had hip replacement surgery can tell you that it is major surgery, requiring a long recovery time. However, some patients who had Zimmer Duron Cups implanted are finding that they now require second surgeries to fix possibly defective implants. Gail S. is one such person.

"On Thanksgiving evening in 2006 I was in an auto accident," Gail says. "It took a long time to get a diagnosis but eventually they found there was a tear in my hip. Where the top of the femur meets the hipbone itself there is a ball [the top of the femur] and a cup. The area has a lip that is designed to keep the femur in place but the tear in my hip was causing problems. I had no hip problems prior to the car accident. 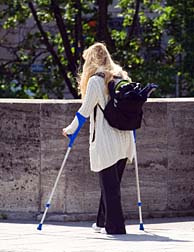 "In December 2007, I had hip replacement surgery on the right side, where the tear was. They put a porcelain Zimmer cup into the hip. They used porcelain because it was supposed to have a good life. The rod into my leg is made of titanium.

"Around the time I should have had less pain [about three months after surgery], I started to worry that something was wrong. During my exercises, I could feel an eerie movement in my hip. My exercises became more and more painful. I could feel my leg start to give out. I would be standing at my kitchen sink doing dishes and the leg would, on its own, just give out. It was as though the top my hip was a rocker and it would just slide on its own. It was very uncomfortable."

Realizing that her condition was not improving despite the hip replacement surgery, Gail sought additional medical help. When her orthopedic surgeon could not find anything wrong, Gail called Blue Cross, who urged her to go to a hospital. Gail was eventually sent for tests, where the doctor came back with a partial diagnosis.

"He told me that either the liner in my hip was loose or I had an infection. They decided to do surgery, but when they went into surgery [on June 16, 2008] they didn't know what they would find. It turned out the liner in the joint had slipped and was pinching my leg. I was not told why the liner had come out of place—I wasn't playing sports and it wasn't a long enough time for normal wear and tear. No one will tell me why this happened. Anything I found out, I did on my own by looking it up.

"My hip hasn't improved, but that could also be because of muscle atrophy from the two surgeries. I'm still walking with a crutch, which is not attractive and is very uncomfortable. I don't know when this will resolve. There is a lot of tissue damage because I had two surgeries so close to each other.

More ZIMMER HIP REPLACEMENT News
"I've lost my job because they could not hold it for me any more. I have trouble sitting because I have bursitis. This has affected everything—driving, going to the grocery store, getting dressed. It's difficult to pick my grandchildren up. Everything you take for granted changes drastically—the list of things that changes in your life is incredible.

"I thought six months ago that in three months I would have my life back. I have no idea what's a head now. If something is going on with Zimmer—the impact on my life is inexcusable. You can't have a conscious and do this to other people. Hip replacement surgeries might be common, but if they go wrong they go very wrong."

If you have been harmed by the use of Zimmer Duron Cups, contact a lawyer to discuss your legal options.