Message to Zimmer: We Are Not Machines

Forgive me if I've missed something here, but what the hell is going on with medical products manufacturers, such as the people who make the Zimmer Durom Cup? A Zimmer hip replacement patient should not be made to suffer through the pain and trauma of a failed Zimmer Durom, only to have to require a second surgery to have it fixed or replaced.

Perhaps they haven't noticed that people don't come with hoods, or fenders that can easily be unbolted, and bolted back on. Perhaps they forget that hip replacements represent invasive surgery, which carries a long recovery curve. 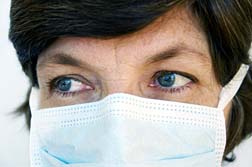 Call me the average hip replacement patient, for I represent all of them. I speak for them. Joe Six-Pack? Joe the Plumber?

Call me Joe Hip. I'm the guy who, like many of the hip replacement patients I'm a composite of, remains active in my upper years. I'm not just coasting through middle age; I'm running through it, driving forward with all the energy I've got. I don't care how old I am, I'm way too young to have a hip give out on me. Thank goodness hip replacement is an option.

And okay, I know there are complications with surgery. That goes with the territory. But in case hip replacement parts manufacturers haven't noticed, I'm not a car. I'm not a machine, okay? I'm a human being, made of flesh and bone, with emotions. I feel pain.

And I also feel anger, because I feel the manufacturers are treating me like I'm a bloody car. Okay, so a part goes wonky in my Nissan, or some such vehicle. There's a recall, I take it in, and I do without it for a day while they peel off a few panels, unbolt the wonky part and replace it with a new one. I feel the inconvenience of doing without the car, but the Nissan feels no pain. It's a machine…

I am not a machine. Thus, the initial cost to my flesh and bone to replace my natural hip with one made of cobalt-chromium is massive, but worth it.

Worth it, especially given the assumption that medical products manufacturers test, and re-test their products before they are allowed to be released to the general public. These are things that go inside the human body, for gosh sakes. We have feelings. We are susceptible to infection. It's one thing to open us up, to fix something. It's quite another to implant something in there, that wasn't there when we were born, in the first place.

Such is the stuff of modern medicine. The bionic man lives, and a real-life Steve Austin is not far from the truth. But let me tell ya, if Steve Austin were a real citizen and not just a television character from the 1970s, you'd never see him. He'd always be in the shop, having something replaced.

Like a Zimmer Durom Cup, for example. They were used in Europe, and quite successfully, until the US Food and Drug Administration approved their use in this country in 2006. The Durom Cup, as noted above, is made of cobalt-chromium alloy and fashioned from a single piece of material.

Hip replacements are de rigueur for an aging baby boom that still wishes to preserve its mobility, and it wasn't long before 13,000 of those Durom Cups were chugging away under the skin and muscle of 13,000 of us here in America.

But some of us started having problems. Significant problems. Studies were appearing that showed about 5 percent of our number were experiencing significant complications after our surgeries. Specifically, Dr. Lawrence Dorr in Los Angeles found that 14 of his 165 Durom hip replacements failed in one form or another, requiring additional surgery to correct problems.

And then in July, we heard about the recall. Zimmer Holdings recalled the Durom Cup. At the time, the company said that it was doing so to give the manufacturer time to extend additional training to surgeons, before any more Zimmer Durom Cup hip replacements could take place.

So maybe the surgeons weren't trained properly on the new Zimmer Durom Cups, although a prominent orthopedic surgeon like Dr. Dorr could be forgiven for taking issue with that position. Maybe the Durom Cup just didn't work properly. Maybe it was just a bad design. I dunno.

But a recall? For gosh sakes. Hey Zimmer, and all like you. Get your acts together. You're making medical devices that go into our bodies. It's not like you can just run me into a service bay and unbolt my leg to get at the defective part. A lot of us, especially those of us who lack adequate health insurance, have gone through financial hardships to get that hip replaced in the first place. And now to go through it again?

If surgeons were not properly trained before Durom was approved for use in the US, why not? Why wasn't the training done, and verified, before surgeries were approved? And before the Zimmer Durom Cup was approved for the general public, how many test patients were given the new Zimmer Durom Cup replacement hip? I assume they would have been well compensated for taking that risk. And how long did they have the new hip, before you determined that enough time had gone by to feel comfortable that they were finally appropriate for the general population? Tested, and trained.

So I have a Durom Cup in my hip. Great. So far, no complications. But will I have them? Or not? And how the hell do I live with that? How in hell do I walk, jog, chase after the grandchild, and all the while in the back of my mind, wondering that if I move the wrong way, I might have a problem? C'mon…

More ZIMMER CUP News
If I have a defective product at home and it's recalled, or there is a safety issue with it, I can just run it back to the store for a replacement, or ship it back to the manufacturer for my money back. Damn machines. We have too many of them anyway.

But in case you haven't noticed, medical device manufacturers, we are NOT machines. We are PEOPLE. And anything that goes inside our outer walls must be meticulously researched, tested, manufactured, and tested some more. What do I do about a recall of something that is bolted, pinned and screwed to leg bone?

What if it were you?

A recall, eh? The recall of a medical device hammered and pinned into my leg and pelvis? A response to which, will require going under the knife AGAIN, costing thousands of dollars and weeks of additional recovery, because you either didn't get it right, or didn't care to.

A recall of my Zimmer Durom.

If you have suffered losses in this case, please send your complaint to a lawyer who will review your possible [Zimmer Cup Lawsuit] at no cost or obligation.
Request Legal Help Now