For some people, the thought of one hip surgery is daunting and two hip surgeries seems unbearable. Addison L. (not her real name) had six hip replacements in 10 years—five replacements on one hip and one replacement on the other. Her husband, Frank (not his real name) says that most, if not all, of the surgeries involved Zimmer hip implants.

"I can't say for certain that all the surgeries involved the Zimmer implant," Frank says. "But I think it was every time because Zimmer is what the doctor likes to use." 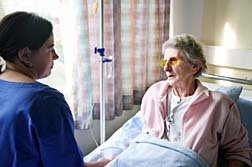 Addison's most recent hip replacement was in October 2007. She says she has not been able to work since that surgery and has not yet fully recovered from it. Her husband says that she has been basically bedridden since that surgery.

"I would say she's had a lot of pain from the surgeries, and that's putting it mildly," Frank says. "She's tough and has a high tolerance for pain. But she's been bedridden since October. She can get to the bathroom and can get to the kitchen with a walker. She was able to walk a little on a cane, but now she's back to the walker."

Frank says that Addison has had several problems with her hip implants, including enduring two of them popping out of place. He says that both times, the ball popped out of place and pressed into her body. In one case, surgery was required to replace the hip. In the other case, doctors managed to get the hip back in place without surgery.

More ZIMMER DUROM CUP News
All the surgeries have taken their toll on Addison and have had other consequences, as well. She has suffered multiple infections related to her hip replacements and says she spent up to 90 days in hospital recovering from her surgeries. Furthermore, she now requires replacement surgery on her knee, which she believes is a direct result of her hip problems. Unfortunately, she cannot have the surgery right away because her doctor feels she is too fragile to undergo the procedure.

"I thought it was just me, I didn't know it could be the implants," Addison says. "I suffered range of motion problems and pain. It is difficult to pick up my leg. I am still having pain in my hips. There's no question about it, it has affected all my daily activities and the muscle in my leg has been compromised."