The Zimmer hip prosthesis, a device wholly embraced by the medical community when it first came onto the market, has proven to be a frustration not only for hip replacement patients, but also for the surgeons entrusted with their procedures. In the interim the Zimmer Durom Cup, used in Zimmer hip replacement, has become a subject of some debate. 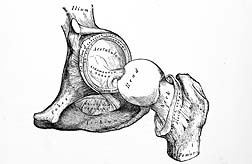 As well, a loophole provided by the US Food and Drug Administration (FDA) that does not require rigorous testing for an updated medical device that addresses a pre-existing procedure, may have contributed to the debacle.

At issue is the Durom Acetabular Component hip replacement device, manufactured by Zimmer and known throughout the industry as the Durom Cup. When it was approved by the FDA and introduced to the American market in 2006, it was initially viewed as a marked improvement to existing technology, in that the Durom Cup is fashioned from a single piece of wrought-forged, high carbon CoCr Metasul alloy. Among other advantages, according to Zimmer Holdings, the Durom Cup manufacturer, a hip replacement using the Durom Cup provides for less bone loss than traditional methods.

Needless to say the Durom Cup was initially embraced by patients and surgeons alike, and it wasn't long before upwards of 12,000 US hip replacement patients were provided with the new Durom Cup technology.

However, reports began to surface of problems with Durom Cups after implantation, that were unlike that of previous, more traditional medical devices. Patients were experiencing intense pain, and there were reports of significant failures quite soon after surgery.

Zimmer was reporting a failure rate of 5.7 percent for its Zimmer hip prosthesis, and of the 12,000 hip replacements done, the expectation was emerging that nearly 700 of those patients could expect to face additional surgery to repair, or ultimately replace the Durom Cup.

This finding was echoed in the contents of an open letter written to members of the American Association of Hip and Knee Surgeons and penned by noted surgeon Dr. Larry Dorr. He reported that out of 165 Durom procedures he had performed, 14 were "revised or required revision" within the first two years following initial surgery. That translates to a failure rate of 23 percent, as compared with Zimmer's own findings of a 5.7 percent failure rate.

Dr. Dorr used his findings to back up his assertion that the Durom Cup was defective. In his view the fixation surface on the cup was problematic, and a circular cutting surface on the periphery of the cup prevented the device from fully seating.

That would explain the degree of pain and discomfort experienced by a growing number of Durom patients. Zimmer's response to Dr. Dorr's assertions was to announce an investigation into Durom Cup complaints, in May of this year. Two months later, in July Zimmer voluntarily ceased all marketing, and sales of the Durom Cup, pending the launch of a training program to educate surgeons on the proper technique required for installing a Durom Cup.

The assertion that the Durom Cup is such a unique animal that it requires specialized training that would be over and above what even the most skilled orthopedic surgeons would be capable, raises the question as to why the device was not more thoroughly field tested prior to the issuance of FDA approval.

What's more, if specialized training was required in order to accomplish a successful hip replacement using the Durom Cup, was the training afforded to surgeons at the time the Durom Cup was approved for the US market? Or rather, is this a reactive response given the fallout from the failing Durom Cup hip replacements?

While Dr. Dorr was of the opinion, in April of this year that the Durom Cup was defective, the manufacturer did not share his view. Therefore, there was no Durom Cup recall. The manufacturer, Zimmer Holdings, holds the position that their device is indeed not defective, and therefore concludes that the problem lay with improper implantation based on the uniqueness of the Durom Cup.

How this sits with surgeons, many of them with a lifetime of experience, remains an interesting question. If the manufacturer required additional training in order to facilitate the successful installation of a Durom Cup hip replacement, one would assume the training and techniques would have been made available prior to surgeries commencing. Was it a communications problem? In other words, was the training available, but not properly communicated to the medical community?

And how does this issue impact the FDA policy that effectively allows a manufacturer to fast track a new medical device if it addresses a pre-existing procedure? When a new procedure is designed, or a radically new device is fashioned, rigorous field-testing is required before the device can be approved for use in the wider market. However, when a device is simply re-designed, or is an update to an already-existing device, only cursory safety approvals are required.

More ZIMMER DURON CUP News
All of this leaves patients in the lurch. Zimmer announced in October that it had set aside $47.5 million to cover claims, and revisions required for surgeries which occurred prior to the company suspending sales in July. That could be good news for the 12,000 patients who underwent Durom Cup his replacements before the suspension. However, it is unclear what the response will be should complications continue following the resumption of sales and marketing of the Durom Cup in August.

That was also when Zimmer announced additional labeling to the medical device, and the launch of an Internet-based training program geared towards surgeons. It has been reported that doctors are required to successfully complete the Durom Cup training program online, before Durom Cups will again be made available to them.

As of the 1st of November, it was reported that about half of the surgeons who had been using the Zimmer Durom Cup prior to the suspension of sales in July, had accessed the training for the Zimmer hip prosthesis. Thus, for both surgeon and patient, Zimmer hip replacement has been a source of frustration that have sent patients, anyway, seeking help from their lawyers.

If you have suffered losses in this case, please send your complaint to a lawyer who will review your possible [Zimmer Duron Cup Lawsuit] at no cost or obligation.
Request Legal Help Now