Yaz Top-Selling Oral Contraceptive in the US, But Questions Remain About Safety 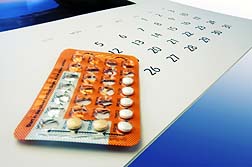 Yasmin, fist approved by the FDA in 2001 and its newer sibling Yaz contain lower levels of estrogen than older birth control pills. The potential for estrogen to trigger blood clots has been a concern ever since oral contraceptives (OC) were developed in the 1960s. Newer products have sought to lower estrogen levels. However progestin, the other ingredient in birth control pills, is thought to also be an issue for cardiovascular problems according to the type of progestin used.

Drospirenone is a novel progestin that is contained in both Yasmin and Yaz.

Approved in 2006, Yaz is Now the Best-Selling OC in the US

As outlined in yesterday's edition of the New York Times, the two recent studies on Danish and Dutch women found a higher risk for blood clots in users of newer progestins. The results counter a large-scale study funded by Bayer itself that found no difference in the risk for cardiovascular problems or death in women taking drospirenone birth control pills compared to women who took pills that contained levonorgestrel, a progestin that has been used since the 1970s.

Dr. David Grimes, clinical professor of obstetrics and gynecology at the University of North Carolina medical school raised the possibility that the European studies might not translate to a more ethnically diverse American population. And even if the risk is realistic, Grimes told the New York Times, it is minuscule.

There are other issues. Last October the FDA cited Bayer for two misleading television ads promoting Yaz. In the FDA's view Bayer overstated the drug's efficacy, minimized the risks and incorrectly lauded its benefits for patients suffering from pre-menstrual syndrome and acne.

More YASMIN/YAZ News
In August the FDA was again on the line to Bayer, this time over deviations from quality control standards at a manufacturing facility in Germany that makes drospirenone.

Meanwhile the Yaz lawsuits keep coming. Anne Marie Eakins, a 34-year-old teacher and mother of two from Grafton Ohio, is suing Bayer for damage to her right lung after developing blood clots in both lungs in 2007—the same year she switched from other birth control products, to Yaz.

"To be perfectly honest, I asked my doctor about Yaz because I had seen the commercial and it mentioned helping control your period symptoms and acne, which was very attractive to me," Ms. Eakins told the New York Times. "I didn't think it was going to be worse than any other pill."