ATV Rollovers: ATVs are not Toys

Despite how they are portrayed in television commercials and magazine advertisements, ATVs are a risk for rollover accidents and should not be considered toys. They can be driven at high speeds and some are prone to rollover accidents, making them all the more dangerous. 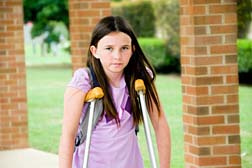 According to Robin Ingle, a statistician in the Directorate for Epidemiology at the Consumer Product Safety Commission (CPSC)--in an article published by the Washington Post)--one of her first projects was to "generate statistics on injuries and deaths associated with all-terrain vehicles." Ingle notes that since regulatory agreements with CPSC and the ATV industry expired in 1998, the number of deaths has skyrocketed, from 536 deaths in 1999 to 767 deaths in 2004. Between one quarter and one third of the dead and injured were children.

This is not to suggest that parents who let their children ride ATVs are bad people. They are not. They have every reason to believe that the child will be safe when driving the ATV. After all, the vehicles are designed to go over all terrains and the child has had years of training. Furthermore, the child is wearing all the necessary safety gear, so even if something goes wrong, he or she will be fully protected. And, if ATVs are so dangerous for children to drive, wouldn't there be a law against it?

First, ATVs, despite their name, are not designed to be driven on all terrains. Many carry warnings that steep slopes should not be attempted in an ATV—but what constitutes a steep slope varies from person to person. Furthermore, how is a child to determine what constitutes a steep slope? Chances are the child will not recognize that a slope is too steep until he or she is already on it. Second, safety gear can prevent some injuries, but not all of them. Safety gear will not protect a child who has had an ATV roll over on him or her. The weight of an adult size ATV is enough to crush a child.

Even years of training on an ATV is not enough to ensure that a child is safe driving an ATV. The Oregonian recounted the story of a 13-year-old girl, who was driving an ATV with her younger sister and cousin. The ATV they were on rolled over, killing the driver's younger sister. Both the driver and her sister had been driving ATVs for years—in fact, three generations of the family had driven ATVs.

More ATV ROLLOVER News
Although there are warnings on the ATVs against children driving them, compliance is voluntary, and the warnings really protect the industry from lawsuits. Sue Deloretto-Rabe, from Concerned Families for ATV Safety, told the Oregonian that despite the warnings, their ATV dealer sent an employee to "fit" the machine to her son Kyle, without ever questioning his size or age (Kyle was 10 years old when he was killed in an ATV rollover accident).

No matter how well-trained a child may be at driving an ATV, some ATVs are designed in such a way that makes them rollover far too easily, and a child will have great difficulty controlling an ATV that is about to rollover. Some ATVs do not have proper safety equipment, making anyone in the ATV prone to serious injury.

ATVs can be just as deadly as other motor vehicles, with one distinct difference: in a motor vehicle, passengers and drivers have safety equipment such as air bags and a frame around them to provide some protection. ATVs do not have those features, yet they can be driven at highway speeds. They are not toys; they are motor vehicles.