In a scene straight out of a crime novel, a wrongful death case dating back 28 years has finally earned a wrongful death judgment worth $30 million after a judge ruled in July that a woman who died in 1981 may have been a victim of government bungling. 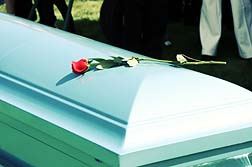 According to a story today in the Boston Globe, Norfolk Superior Court Judge Patrick F. Brady found South Boston crime boss James 'Whitey' Bulger and his associate Stephen 'The Rifleman' Flemmi liable for the murder of Debra Davis in 1981. The legal team representing the family of Davis, who was 26 at the time of her death, is hoping that this most recent decision will persuade a federal judge to come down hard on the Federal Bureau of Investigation (FBI) for allegedly mishandling the two purveyors of crime. The latter were longtime informants.

The families of Davis and two other victims are hoping for a favorable verdict for their clients after arguing that the government should be held accountable for the three deaths. Flemmi is also accused of molesting Davis' younger sister, Michelle, while she was a teenager and for inflicting emotional distress on Davis' mother, Olga.

On Wednesday Judge Brady ordered both Bulger and Flemmi to pay $15 million each in damages to the Davis family. He also ordered Flemmi to pay $3 million for the molestation and another $500,000 to Olga Davis for emotional duress.

Collecting, however could be a problem. Bulger is 80 years of age and on the lam, while Flemmi is serving a life sentence for his participation in murders of no fewer than 10 people. The pair's assets remain a question mark, given that much of their money and property was previously seized by the federal government.

More WRONGFUL DEATH News
According to the Boston Globe if any monies were indeed collected, it would go to the estates of Debra, Michelle and Olga Davis. The elder Davis passed away two years ago, while Michelle died in 2006.

The Globe reported that Flemmi previously stated in wrongful death testimony that he did not wish to end the life of Debra Davis, who was his girlfriend at the time. However crime boss Bulger insisted that Davis had to be killed, as she knew too much with regard to their relationship with the FBI as informants.

In July, US District Court Judge William G. Young found the US federal government liable for the deaths of Debra Davis, as well as Deborah Hussey and Louis Litif—and was considering an award of $350,000 to each of the three families for pain and suffering experienced over the wrongful death of their loved ones.