Wrongful Death in Iowa Could Multiply

In a copyrighted story appearing yesterday in the Des Moines Register, an Iowa mother is accusing a State-run home for the disabled of wrongful death, and indicated that she will be seeking a wrongful death attorney to pursue a wrongful death lawsuit. 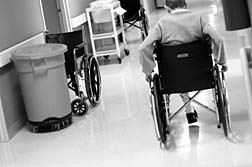 For now, Georgette Alexander is grieving over the loss of her son. What complicates the matter even further is that Alexander is an employee of the Iowa Department of Human Services, which runs the Glenwood Resources Center. In effect, then, she will be suing her employer over the death of her son.

Timothy Alexander, age 26, died over the weekend and is the 11th death reported at Glenwood this year alone. Advocates claim that the death count is unusually high, and Glenwood is under the microscope until investigators get a handle on just what it is that might be underfoot relative to the loss of life at the facility.

"I just can't believe they did this to my son," she said in comments published in the Des Moines Register. "After the last death they had there, I remember telling my co-workers, 'they had better hope and pray that never happens to my son.' "

According to the account, Timothy Alexander is said to have choked on some food while having dinner at the Glenwood facility last Wednesday. According to his mother her son suffered a seizure, was transported to hospital, then returned to Glenwood the same night.

The following morning, Timothy is said to have risen, had a bit of breakfast, and then told the staff at the facility that he was going to lie down. That appears to be the last response that anyone ever had from Timothy Alexander. When Georgette's husband called the next morning at about 10:15 to inquire as to how Timothy was doing, staff found him unconscious and unresponsive. He wasn't breathing, and there was no heartbeat.

It was reported that staff at Glenwood administered CPR, and the young Alexander man was rushed to a local hospital where he remained unresponsive until November 22nd. By then his conditioned had worsened. Still unresponsive, his brain was continuing to swell and he could not breathe on his own.

On the advice of their doctor, the Alexanders decided to remove Timothy from life support.

His mother believes that Timothy's death was a wrongful death, given the normal practice of keeping a seizure patient in the campus infirmary for a period of time for observation. However, it was reported that the infirmary was particularly busy, and staff therefore allowed Timothy to go back to the house he shared with other residents on the Glenwood campus.

Georgette recalls that her son was full of life and worked on the outdoor crew of the facility, planting trees and undertaking landscaping work. He was also a participant in the Special Olympics. Georgette told the Des Moines Register that her son had, in her view, 50 good years left in him.

More WRONGFUL DEATH News
In November of last year, according to the Des Moines Register the US Department of Justice raised the accusation that Glenwood had serious deficiencies in resident care, and raised the matter with the Office of the Iowa Attorney General. It was reported that the most immediate concern related to overall clinical care, and the failure of facility staff to minimize choking hazards with respect to residents, while eating.

In October, the facility was fined $27,500 for 'repeatedly' failing to give oxygen to a resident with respiratory problems.

Glenwood is home to a collection of about 315 disabled adults and children with some form of mental impairment. Iowa Protection and Advocacy, a group that monitors the disabled in the State, began an investigation in the summer and officials from the Justice Department now make regular visits to the home.

However, those measures won't bring Timothy Alexander back. He died what his mother calls a wrongful death. She will be hoping that a wrongful death lawsuit, filed with the aid of a wrongful death attorney, will find answers, provide justice and bring a grieving mother some closure…

Posted by
Tamer of horses
on July 28, 2013
Beat GRC with their own policies and rules. I know a lot of their dirty laundry.. Get in their and fight them.. and don't quit.. not ever!