A Texas family has filed a wrongful death lawsuit accusing the fraternity Sigma Alpha Epsilon of being responsible for the death of their son. 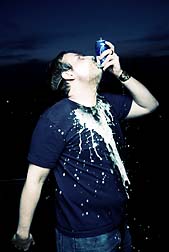 Carson Starkey, 18, died in California last year after reportedly binge drinking with his fraternity, the Austin American Statesman reports. The teenager was a freshman pledge at the time and allegedly drank himself unconscious on December 2, 2008.

More WRONGFUL DEATH News
An autopsy revealed Starkey's blood alcohol level was between 0.39 and 0.48, an amount that authorities said was the equivalent of surgical anesthesia.

The lawsuit names the national fraternity, the chapter at California Polytechnic State University and nine members of Sigma Alpha whom police claim organized the hazing event that led to Starkey's death.

"By bringing this lawsuit, we hope to bring attention to the dangers of hazing, cause fundamental changes in fraternities and prevent other families from suffering as we have," said Scott Starkey, Carson's father.

According to the suit, other chapters and members of the fraternity have been involved in hazing and it cites a $16.2 million verdict against Sigma Alpha from a hazing death that occurred in 2006.