You would think that if you were injured on the job, workers' compensation would protect you from the financial devastation that could result. After all, some on-the-job injuries are life-changing, despite a push to ensure worker safety. Workers compensation law is meant to protect a worker's right to financial compensation in the case of a work-related injury. 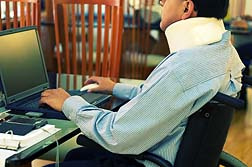 Workers' compensation lawsuits do not tend to get a lot of media coverage because they are generally small-scale claims. Most work related injuries involve one person who hurts him or herself at work, loses a few days of pay and eventually returns to his or her job. Of course, not all injuries are minor. Some are life-threatening or at the very least, change a person's life.

For example, consider people who worked for a long time around asbestos. They are now dying of mesothelioma, a deadly form of cancer. They were exposed to the mesothelioma because of work-related activities. Many were not given appropriate safety gear, such as masks and filters, to prevent them from inhaling asbestos fibers, and now they are paying the price. They should be compensated for the medical bills, loss of wages and pain and suffering they have encountered because they were injured through no fault of their own.

Other employees suffer a variety of injuries that can be debilitating or at the very least require time off work. These include back injuries, neck injuries, carpal tunnel syndrome, hernias, broken bones and head wounds. Such injuries often require medical treatment and physical therapy, which can be costly.

Workers' compensation is type of insurance that is meant to protect employees from financial hardship due to work related injuries. Unfortunately, people who apply for workers' compensation often find that they have to go through numerous hoops to have their claim approved. They are told that they have not submitted the correct paperwork (even if it is paperwork the employee was previously told was required) or that their doctor's notes have not arrived or that there is no proof that the injury was work related. All this is done to save the system money, but results in financial hardship for people who were injured on the job and cannot work for a while.

Robert B. found himself in severe financial difficulty after his workplace injury. His boss denied that the injury happened at a job site, despite there being 2 witnesses to the incident, and workers' compensation denied Robert's claim. "[I have a] torn meniscus, torn ligaments, [required] 23 days off work without pay, [and had] $25,000 worth of medical bills from repairs to my right knee…" Robert says. Now, his medical bills are headed for collection and he does not know what to do.

More WORKERS COMPENSATION News
Those who are lucky enough to have their claims approved may find that they receive far less than they were expecting, or they are told they must return to work even though their doctor has recommended more time off work. Some even say they have lost their jobs because they filed a workers' compensation claim.

Workplace injuries are not uncommon. There are many workplaces that lend themselves to injury. Even workplaces that seem relatively harmless can become the scene of a worker injury. When that happens, most workers believe that workers' compensation will be there to ensure they are properly compensated for medical bills and lost wages related to that injury. What they sometimes find out is that it is much more difficult to obtain the compensation than they realized.

If you have suffered losses in this case, please send your complaint to a lawyer who will review your possible [Workers Compensation Lawsuit] at no cost or obligation.
Request Legal Help Now

Posted by
Kim Jackson
on May 18, 2016
checking to see if there's anything such as workman's comp hardship after you had to settle your workman's comp case