A worker's right to workers compensation was recently tested in the Kentucky Supreme Court after an employee was initially denied workers comp benefits. In its ruling under workers compensation law, the Court ruled that according to statutes in the state of Kentucky a claimed fall in the workplace is assumed unless the employer can show substantial evidence to the contrary. 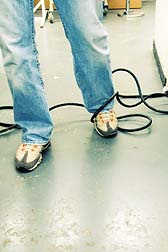 According to the July 2nd issue of Lawyers USA the plaintiff in the case worked for the employer as an account manager. After suffering a fall near the vending machine in the workplace break area, the victim of the fall applied for workers compensation benefits.
The plaintiff claimed that there was trash on the floor near the vending machine, which led to her turning around and falling to the floor.

The employer however, opposed the claim on grounds that in the employer's view the plaintiff was clumsy and wore shoes with heels, which precipitated the fall. The defendant further denied that there was trash lying about on the floor in the break room where the employee allegedly tumbled to the floor.

The plaintiff pursued her claim to the Kentucky Supreme Court and in the end the Court found in favor of the plaintiff. In 'Vacuum Depositing v. Dever, No.2008-SC-000853-WC. June 25, 2009,' the Court held that the plaintiff was entitled.

More EMPLOYMENT News
"The record contained no evidence that [the plaintiff] suffered from a pre-existing disease or physical weakness that caused her to fall," the ruling went on. "Nor did the record contain evidence that her footwear was inherently dangerous and inappropriate for work in the employer's offices."

In the end the Justices of the Kentucky Supreme Court remained convinced that "evidence the [plaintiff] was clumsy and wearing high heels was not sufficient to prove that the cause of her fall was idiopathic," the court said.

Workers compensation law exists to provide workers with a basket of protections in the event of injuries sustained in the workplace. Unfortunately, in some cases a workers compensation claim often pits employee against the employer, the latter often suspicious that a workers comp claim is suspect. At the same time there are cases when a worker's legitimate claim is denied.

If you have suffered losses in this case, please send your complaint to a lawyer who will review your possible [Employment Lawsuit] at no cost or obligation.
Request Legal Help Now