Worker's Compensation: Special Provisions for Those at Ground Zero

On this day, the 7th anniversary of the what has gone down in the annals of history as a simple date—9/11—it is revealed that thousands of workers who toiled at or near Ground Zero at the former World Trade Center (WTC) site have developed, or are in danger of developing asthma from breathing in the toxic air, paving the way for a Worker's Compensation claim. 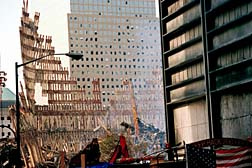 Such a development carries a significant impact with respect to Worker's Compensation, given the normal two-year window for filing Worker's Comp applications after an injury has been suffered while on the job. If an individual were to file after the window had closed, he or she would be out of luck.

But much like our world as we know it has changed after witnessing, and enduring the horrendous felling of the Twin Towers and the human toll that went along with it, those Worker's Compensation rules have changed in kind. Not forever, mind you. But at least it is an acknowledgement that, much like the Twin Towers horror was unprecedented, so too is the unknown territory, and future of those faced with the grim task of cleaning up after 9/11.

And it's not just workers, either. It has since been discovered that any adult who was within the vicinity of the World Trade Center at the time of the attack September 11th, 2001 is twice as likely to develop asthma as the general population.

A study of data released from the World Trade Center Registry, made available yesterday, reveals that three percent of adult residents and workers in the immediate area of, and at the time of the attack or soon afterward, developed asthma.

By the numbers: 3,800 to 12,600 adults who were exposed to the choking, and toxic air of the World Trade Center disaster site developed full-bore asthma. As for the emotional fallout—which one could assume would be deep—it has been reported that 35,000 to 70,000 adults developed post-traumatic stress syndrome related to the attack.

The long-range health effects of exposure to toxic air at, or near the World Trade Center site will be tracked carefully over a 20 year period by New York's health department and the Centers for Disease Control and Prevention, in Atlanta. Of the estimated 410,000 individuals most intensely exposed to the site 71,437 people signed on to be scrutinized health-wise for the next two decades.

As for Worker's Compensation (WC), it has been reported that the New York State WC Board has been inundated with more than 30,000 queries from affected workers concerned about their future health, and locking in their right to file for WC at some future date. Thus, the application was not an actual claim for benefits, but rather a statement of potential intent, should health deteriorate at some future date.

More WORKERS' COMPENSATION News
Such are the special provisions for Worker's Compensation extended to individuals negatively impacted by the Twin Towers attack. Normally, the two-year window applies, but that limitation was waved for anyone at, or near the World Trade Center.

There IS a deadline however, and that deadline is September 11th, 2010. Two years from today. But again, that deadline is for filing a potential intent to file, or rather the preservation of the right to trigger a claim, long after the disaster happened. Once that preservation is entrenched, there is literally no end-date on the capacity for actually filing, based on a future health risk stemming from the WTC site.

So far, there have been 12,234 actual claims filed with the New York WC office. There will likely be more—not to mention the scores of lawsuits that have been launched, or are pending, related to the horrific losses in an equally horrific act of terrorism.

If you have suffered losses in this case, please send your complaint to a lawyer who will review your possible [Workers' Compensation Lawsuit] at no cost or obligation.
Request Legal Help Now