Whistleblowers Uncover a Flood of Wrongdoing

Whistleblowers can take on many forms - from the tough-talking advocate to the quietly courageous, both seeing a wrong and, come hell or high water, just has to say something about it.

Dara Fresco falls into the latter category. On the day in early June that she launched her Cdn. $600 million class action lawsuit against CIBC Bank in Canada for failing to pay overtime, the soft-spoken bank teller had just dropped off her toddler at daycare. 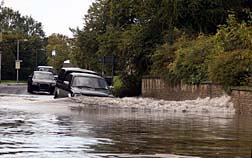 Being a whistleblower can be pretty tough stuff. But if nobody says anything, companies and corporations tend to get away with murder. And there are laws that protect a whistleblower from retribution over speaking up about a potentially criminal, abusive or fraudulent activity.

Still, while it may be morally satisfying to call the dogs in on your employer, it ain't a cakewalk.

Take the two former executives of the Arizona State Treasurer's Office who co-operated with an investigation into the activities of then-State Treasurer David Petersen, whose findings eventually led to his indictment, conviction and resignation.

Even though Blaine Vance, the former deputy treasurer for the state of Arizona, and Tony Malaj, former chief of staff for the agency, were exempt from personnel rules that protect state employees, legal representatives claim that their eventual firings stemmed from unjust reprisals, and violates the state statutes protecting whistleblowers from recrimination.

The two are seeking $5.6 million in damages. Petersen pled guilty, and was convicted of a single charge of failure to report outside income - a plea that came after a long investigation into the state treasurer's alleged activities that went against state conflict-of-interest guidelines. While Vance and Malaj were vindicated by Petersen's eventual conviction and resignation their co-operation unjustly, say their lawyers, cost them their jobs.

In another recent whistleblower action, Tyrone Walker of North Forest has filed a lawsuit against the interim superintendent of the North Forest Independent School District and four of its Board members for defamation, and over a suspension from his job as interim police chief in March.

Walker states that he was investigating fellow police officers, as well as members of the school board over the whereabouts of $23 million dollars in funds the Board, at the time, could not account for. The requisite financial documentation has since surfaced. Undeterred, Walker is suing for unspecified damages.

And in an incredible story of taking advantage, eight major insurance companies in Louisiana, and their adjusters, are being accused of over-billing the National Flood Insurance Program (NFIP) in the wake of Hurricane Katrina, while at the same time nickel-and-diming homeowners on claims for wind damage against their insurance policies.

In this case, a group of whistleblowers have banded together as the Georgia Company Branch Consultants LLC. Former insurance adjusters, the plaintiffs claim that a re-inspection of 150 flood and wind damage claims found that in every case private insurance companies overcharged the NFIP for flood damage, while at the same time under-reporting wind damage.

In doing so, the companies involved allegedly mitigated their liability at taxpayer's expense, while minimizing their own direct financial responsibility to their policyholders. Allan Kanner, the New Orleans-based attorney representing the litigants, states the activity is in violation of the False Claims Act.

In one damning example, the owners of a four-plex in eastern New Orleans were compensated for flood damage with funds from the NFIP even though there was no flooding evident. However, substantial damage from severe wind met with negligible compensation through regular insurance.

The lawsuit was filed in U.S. District Court in New Orleans in August of 2006, but has been under seal until now. We will watch this suit closely and keep you posted...

If you have identified illegal behavior by individuals or groups from a corporation or a government agency, please contact a lawyer involved in [Whistleblower Lawsuits] who will review your case at no cost or obligation.
Request Legal Help Now