Whistleblowers: The Results could be Rewarding

The world needs a few more good whistleblowers. And the payoff can be more lucrative than the good feeling that you've done something right - something worthwhile. Beyond the warm glow of a good deed done, may lay a pot of gold in the form of settlement dollars.

Especially if you have been wronged in the process. And for you there are rights, statutes and legal precedents that serve to protect the whistleblower in the midst of what is often a sticky situation -- and sometimes it can be downright nasty.

But as the saying goes, sometimes you gotta to do what you gotta do -- especially in the face of inappropriate, reprehensible or illegal behaviour on the part of a corporation, or the individuals who speak for it. Perhaps you're privy to unfairness in the workplace. Somebody in authority is cooking the books and fleecing his pockets, or padding time sheets to claim unearned overtime. The offence may not be as serious (some would say glamorous, especially when Hollywood come s calling) as Jeffrey Wigand taking on the tobacco industry over their practices in the formulation, and manufacturing of addictive tobacco products. 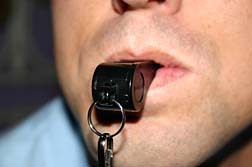 However, maybe in your world there is some misleading packaging going on, or blemished merchandise sold and shipped as new. A problem on the production line may have adversely affected a skid or two of product before it was corrected, but the compromised stuff is going out the door anyway, and nobody is talking.

Maybe it's time to speak up. It's about time somebody is held accountable.

Few people would be unaware of famous whistle-blower cases like Mark Felt, the FBI informant who fed revelations to Washington Post journalists Bob Woodward and Carl Bernstein that eventually led to the Watergate scandal and the resignation of President Richard Nixon. Karen Silkwood was attempting to rationalize, and eventually expose inappropriate handling of contaminated waste at the former Kerr-McGee plant in Oklahoma, before her life came to a mysterious end. Enron Vice-President Sherron Watkins exposed the Enron accounting scandal in 2001.

But there are some lesser-known scandals, and it took a whistleblower to expose them:

A former school principal, and a computer network specialist in Middletown, New York both alleged an inappropriate relationship between a school superintendent and a teenaged boy after finding pornographic images on a school computer. The superintendent was eventually arrested on sodomy charges - even so, both whistleblowers were fired, but are fighting back in court.

An employee of the city of Brigantine wasn't fired for ratting on other city employees seen shooting pigeons on municipal grounds -- but he was harassed on the job and hit with demotion. He sued, and was awarded $345,000 in damages. The pigeons are safe.

A deputy police chief was fired after investigating alleged wrongdoing by Detroit mayor Kwame Kilpatrick. A member of the mayor's security detail was also let go. Both are taking on the mayor in court in a highly publicized whistleblower case.

Plainly, being a whistleblower isn't easy. Depending on the scope of the indiscretion, anyone with the courage to cry foul could face horrendous backlash.That said, the basic tenets of a whistleblower case are to hold corporations and public entities accountable, while protecting, and compensating the victim(s), and the whistleblower.

In the case of Boston Scientific, that compensation amounted to U.S. $74 million dollars over the inappropriate release and shipment to hospitals of a device known to be defective.

The real-life Erin Brockovich spearheaded what would turn out to be the largest settlement ever paid out in a direct-action lawsuit in U.S. history: U.S. $333 million. Typically, the whistleblower earns a negotiated percentage of any final settlement.

More News
If you are witness to misconduct involving stock or securities fraud, corporate corruption, threats to public health, malpractice or any kind of fraud, it's good advice to check your own closet for skeletons before speaking your mind.

And consult a lawyer before you pucker. Know what your rights are before you blow that whistle. Then, if the road ahead becomes rocky, you at least have the assurance that you're on stable legal ground, no matter what.

Blowing the whistle is not for the faint of heart, and not for the fame. Erin Brockovich had no idea, when she was chasing the source of soil contamination, that one day Julia Roberts would portray her life on the big screen.

And she didn't do it for the money. She chased the bad guys and spoke up, because it was the right thing to do.

If you have identified illegal behavior by individuals or groups from a corporation or a government agency, please contact a [Whistleblower] lawyer who will evaluate your claim at no charge.
Request Legal Help Now