Whistleblower Was Asked 10,579 Questions in Court

Joanna Gualtieri claimed that the Department of Foreign Affairs wasted money by not spending it properly in the 1990s and now the lawyers for the federal government are trying to prove that she was not a victim of harassment when she made the whistleblower claims years ago. In court, lawyers have already asked her 10,579 questions in which she has been required to answer and Gualtieri had answers for all of the questions asked.

Gualtieri worked as a realty portfolio manager for the Department of Foreign Affairs and over the past several years, she has been examined for a total of 31 days in which lawyers for the Justice Department are defending themselves against the $6 million whistleblower lawsuit she filed in 1998 against eight employees she worked with and the federal government. 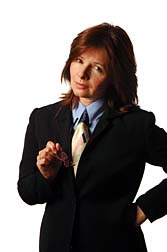 Gualtieri, 46, is a lawyer and the mother of two young boys and made whistleblower claims in the early 1990s that millions of dollars were being wasted by a number of Canadian embassies and Foreign Affairs. She alleged that when she made these claims, she was ignored by those above her, was shunned, moved into a lower position, and was harassed. She has stated that she was not trying to blow the whistle, but that she was just trying to do her job.

She has been on unpaid medical leave from the government for several years and is seeking monetary compensation for the way that her superiors allegedly treated her. She has stated that it was the support from her husband and her friends and family that has kept her in the fight against the government. She feels like she was thrown off the bus by Foreign Affairs and that the Justice Department is the vehicle behind the bus trying to run her over.

2006 is when a majority of the more than 10,000 questions were asked in court, which occurred after the birth of her second child. At that point, the government stated it was almost done with the discovery process. However, a court ruling in Ontario superior Court put a stop to the strategy of marathon questioning.

Robert Beaudoin, a Superior Court Master, ruled that only eight more hours of questioning is allowed. He believes that the lawyers have gone beyond reasonable limits during the discovery process.

Many of the questions developed by the government have been considered argumentative, irrelevant, and repetitive by the lawyer of Gualtieri. Her lawyer, Stephen Victor, has also said that the attorneys for the government were intentionally abusive toward Gualtieri. Victor has alleged that the case is about the harassment that Gualtieri went through and the misconduct of the government. He alleges that the government is not defending itself against the claims made against them, but using the lawsuit as a tool to revisit spending on foreign missions.

More WHISTLEBLOWER News
In June 2006 in the House of Commons, the parliamentary secretary to the president of the Treasury Board, Pierre Poilievre, said that Gualtieri exposed millions of dollars in Liberal corruption. When Poilievre was asked when the Conservatives would decide to go ahead with a settlement in the suit, he responded by saying that the scenario was under review.

The stress of the lawsuit has had a negative impact on Gualtieri's health. In fact, she collapsed one day in court after a series of questioning. However, the case is not anywhere near over. Once the eight hours of questioning is over, the case can then move to trial. The trial is not expected to begin until 2009.

No one from Foreign Affairs or the Justice Department has issued any kind of public statement regarding the case since it is being held before the courts.