A police officer that was let go for a whistleblower incident, Elliot Rosario has been reinstated to his former position earlier this month on the Cheswold Police Force. Officer Rosario was let go from the Cheswold Police Force in December, 2005 regarding a legal situation that arose over a whistleblower incident with his superior officer at the time.

According to Officer Rosario, he believes he was let go for contacting the attorney general's office about some photos his former boss, Susan Kline, had shown him of her engaged in acts of a sexual nature. Two additional police officers lost their positions as well. Richard Alexander and Chief Robbin Vann lost their jobs in the same timeframe. 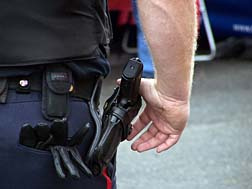 The Supreme Court reaffirmed what a Superior Court ruled that Officer Rosario did not relinquish his rights to have a hearing in regards to his suspension from the police force. There had been question as to whether he would not be able to have a hearing since he did not provide a current address to the Town Council. Officer Rosario felt he was unprotected by the city when they neglected to protect him from being exposed to sexually perverted material that was unsolicited and unwanted by him. He says that he objected to the immoral and unlawful actions of his superior officer, Ms. Kline.

The Supreme Court stuck with the original guidelines set forth in a judgment summary which was a victory for Officer Rosario in Superior Court. The town of Cheswold agreed to pay Officer Rosario $27, 780 and a 10.21 percent interest rate from his termination between Dec. 20, 2005 and April 27, 2007. In addition, he was due to receive $40.29 daily until his reinstatement to the police force took place. The town of Cheswold owes Officer Rosario roughly about $40,000. This is above and beyond the court proceeding of Rosario against the city.

More News
Officer Rosario is seeking shelter under the state of Delaware's Whistleblower Protection Act. Future plans are for Officer Rosario to pursue litigation through the Superior Court. The trial has yet to be scheduled. When Rosario resigned from the force he used terms such as conscientious and careful to describe his attention he gave to his position with the police force.

Richard Alexander challenged the incident of his firing. He sought protection under the police officers' bill of rights. In 2007 he won a summary judgment in the Superior Court. He was paid for back wages for the time he lost his job. Chief Robbin Vann wasn't as successful with his action against Cheswold. The Supreme Court ruling handed down in February stated that the town had just reason to fire him.