The Whistleblower and The Smithsonian

The Whistleblower Act protects workers from retaliation when injurious or unsafe situations are revealed. The mere act of whistleblowing is, in itself, a courageous act that often puts the whistleblower in a difficult position. 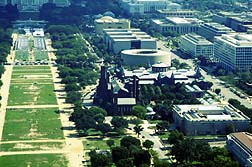 Such is the case with Richard Pullman, an exhibits specialist at the National Air and Space Museum in Washington, DC. The 27-year veteran of the facility has filed a federal whistleblower complaint against the Smithsonian Institute for alleged retaliation suffered by Pullman after he raised the issue of improper handling of asbestos in the museum's walls.

Pullman, who now suffers from asbestosis, raised the issue of asbestos over his concern for fellow workers and the public at large. The facility attracts upwards of 5 million visitors each year.

Pullman asserts that museum management had known about asbestos since 1992, but workers were not told about the problem until 2008, a delay of some 16 years.

It has long been determined that asbestos is most dangerous and the risk for asbestos exposure is highest when asbestos is disturbed. While the dangers of asbestos have been known since the early 1900s, an escalation of asbestos risk in the public consciousness triggered a move to eradicate asbestos from old buildings. Asbestos was often used as an insulating material for furnace ductwork and water pipes. Initially, asbestos removal was considered a high priority. However in recent years that thinking has changed, to the point where asbestos that is intact and out of harm's way—in other words, behind walls and above ceilings where there is no chance of it being disturbed—is less of a threat than asbestos that is disturbed during eradication, or for any other reason.

Regardless, when asbestos is disturbed, the fibers need to be handled with kid gloves and workers, as well as the general public, need to be adequately shielded from disturbed asbestos fibers.

Pullman, who regularly saws into the museum's walls as part of his job, asserts that he and other workers were not provided with protective equipment while disturbing large amounts of asbestos-containing materials. The assertion has also been made that renovation and repair debris have yet to be removed, and thus an unsafe condition remains.

More WHISTLEBLOWER News
Pullman, in a press conference March 17th, asserted that he complained to both museum management as well as other government authorities. His overtures finally resulted in the museum being issued a citation by the Occupational Safety and Health Administration for violation of asbestos regulations. It has been reported that recent tests show asbestos at dangerous and impermissible levels in the previously noted renovation and repair debris.

The museum, it was reported, disputes Pullman's claims and asserts the museum is safe.

In his whistleblower complaint, Pullman asserts that he was harassed and demoted after filing federal worker safety complaints. According to the Associated Press, the Smithsonian denies the charge.

Whistleblowing is a courageous and often thankless act growing out of a concern for one's own health and well-being, but also over a concern for others. It is for this reason that the Whistleblower Act makes provisions and provides protections for the whistleblower. If you have exposed unjust, or unsafe practices in the workplace and fear retaliation, rest assured there are statutes to protect your rights, and a whistleblower attorney can help you.