The Whistleblower and the Voting Machine

With one of the most important Presidential elections in US history mere days away, concern is resurfacing over the integrity of voting machines and the potential for tampering, according to two whistleblowers. Indeed, there has been a lot of whistleblowing going on with regard to one of the most closely guarded freedoms inherent with democracy—the right and the freedom to vote for the candidate of your choice with the assurance that your vote will not only count, but truly reflect your choice in the voting booth. 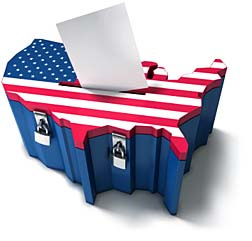 However, comments by two whistleblowers suggest that may not be the case. Chris Hood, a former contractor with Diebold Election Systems, told former ABC News producer Rebecca Abrahams in an interview posted online by Velvet Revolution and apparently conducted in 2006, that computerized voting machines are far from infallible. In fact, Hood said he has seen touch screens that freeze, and the memory cards that contain votes erased. Sometimes, he says, the votes can be retrieved from the memory chip imbedded in the screens, which track and record screen movements. But not always. Sometimes the data on an erased memory card cannot be restored. Thus, those votes are lost.

Hood recalls working an election in 2002 when, as a contractor with Diebold, he was instructed to install a software patch to a series of 56 voting machines over which he had responsibility on behalf of Diebold—a patch that was ostensibly to repair a malfunction in the clock. Hood carried out the work a couple of weeks before the election, but strangely it did not fix the clock. Thus, there is some doubt as to what the software patch actually accomplished.

Hood has since expressed the view that the Diebold election system platform, which is used in many States across the country, is irrevocably flawed and should be done over from scratch, according to comments recorded October 15th 2006, the date stamp on the video posting.

It should be noted here that computerized voting systems were designed as an improvement to older, mechanical machines in an effort to speed the process and make the results more accurate. However, there is the suggestion that the alternative is true, according to another whistleblower who claims that not only is the system mysterious, it does allow for tampering.

"If you're carrying a memory card with every single vote from that day, from a machine," says Stephen Spoonamore, former CEO of Cybrinth and a well-known expert on computer hacking, "…you can change it just like that. Somebody could have it in their car, or anywhere else—they could have a very simple kind of reader, and this has been demonstrated in a number of different hacks, you could just change the information on that card by overriding it, with the same operating system type that was used to record it in the first place."

Spoonamore, in a portion of an interview also posted by Velvet Revolution and also date stamped October 15th 2006, goes on to say that just getting the card successfully from the poll to the processing center is another challenge. Witness the memory cards that were lost in the State of Maryland in a recent election.

Spoonamore says that he has heard reports where people have witnessed votes 'backing up' in a machine. The cyber security guru couldn't begin to wonder why that would be the case, since he has not seen the proprietary codes for the machines. Diebold does not allow it. But he has had a good look at some of the memory cards.

"Some of those cards are capable of taking a negative number," he says. "Now, as a programmer this is a very interesting question. Generally, you try to make code as elegant, clean and simple as possible for security. There is no reason at all, if you have zero votes, and then you add votes going forward, say 10,000 votes as the maximum you could ever have on a machine, that would make sense. So cards should have a range of zero to 10,000.

Why? To steal votes, says the whistleblower.

"That way you can start with a card that has negative 100 votes for somebody, then it takes them 100 votes just to get to zero." Spoonamore, who cites a very good understanding of statistical analysis, maintains that there is statistical evidence backing up his claim.

As for Hood, he says that America's elections are in the hands of corporations, and in his mind and experience they shouldn't be.

"We have essentially turned over our elections to corporations. They are more concerned about return on investment, making dividends for stockholders, than they are about our rights and our elections."

More WHISTLEBLOWER News
Hood said in 2006 that the days leading up to an election, where Diebold workers have access to voting machines, memory cards, et al—constitute a very unsecure environment.

Effectively, it is the corporation that runs the show today.

"Pretty much what happens in an election, is (that) the corporation has all the control. They report back to the State, but the general procedures and policies are established by the corporation in the field.

"If (voting) is the currency of our democracy, it should be kept as secure as money in the bank."

Hood, and Spoonamore are two whistleblowers who have most assuredly caused Americans to give pause as they head to the polls on November 4th—not only to consider who they're voting for, but if their voices will be heard at all.

Posted by
HDA
on September 13, 2012
Why in the world are we, a smart society, trust our toes to any corporation? We all know what's important to any corporation, money for them and their stockholders, if one candidate is looked at as bad for corporations, or certain industry, then we all know what will happen to that candidate's votes.
This thing about chips having a negative number to start out with is really scary.
What an We The People do about this? any ideas anyone.