A whistleblower who cooperated with federal investigators and helped uncover a scheme that saw a government defense supplier allegedly earn an almost 200 percent profit, will himself earn a reward based on a percentage of the $25 million Woodward MPC has agreed to pay the federal government to settle a fraud case. Under whistleblower laws, whomever blows the whistle is entitled to anywhere from 15 to 25 percent of qui tam recoveries. 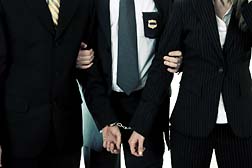 The case involved allegations of procurement fraud by MPC Products Corporation and MPC International (MPC), an aerospace firm with a contract to supply the US Department of Defense (DOD).

According to an October 15th release by PR Newswire, the fraud saw MPC grossly overcharge the government for defense products, then use the payment record to discount their rates to private industry in which the company sought to gain a stronger foothold. Court documents revealed as many as 10 interlocking schemes employed by MPC to administer the alleged fraud.

As an illustration, the DOD was charged approximately $176,000 for a spare F/A 18 Throttle Quadrant Assembly. However the actual assembly had been taken from an existing inventoried production run of 60 assemblies, each of which cost about $60,000. The mark-up afforded the contractor a profit of nearly 194 percent.

The whistleblower in the case was Joe Caputo, a resident of Illinois and a long-serving pricing analyst for MPC who had been fired in 2000 after refusing to comply with the requests of his employer to falsify documents provided to the government.

When he was rehired a year later in a similar role, Caputo took the opportunity to cooperate with authorities. He gathered information and secretly recorded workplace conversations before spending more than 1000 hours helping investigators to analyze documents.

More WHISTLEBLOWER News
MPC will pay the United States a total of $25 million, including $2.5 million in fines related to criminal prosecution. Under the federal False Claims Act (FCA) qui tam actions—a term derived from English Common Law meaning "he who sues on behalf of the king as well as himself"—allow private citizens with knowledge of fraud to help the government recover ill-gotten gains and additional civil penalties.

The FCA allows the government to collect up to three times the amount it was defrauded, in addition to civil penalties of $5,500 to $11,000 per false claim. Under the FCA, whistleblowers are entitled to awards representing 15 to 25 percent of qui tam recoveries.