In a scathing editorial, the Miami Herald reveals that the VA hospital in Miami where VA colonoscopies took place was warned by the Department of Veteran's Affairs about potential problems with colonoscopy equipment. According to the newspaper the Hospital checked its procedures and reported everything fine—that is, until a more extensive review later found problems. 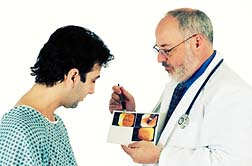 Meanwhile, veterans and their families are incensed that the mere act of attempting to be proactive about ones' health by getting a colonoscopy, has instead potentially put them at risk.

The potential problem was first brought to the fore on December 22nd of last year—three days before Christmas—when the VA issued a patient safety alert to every VA medical center and clinic, warning of possible contamination problems with colonoscopy equipment based on reported problems in Murfreesboro, Tennessee. The latter had discovered that equipment was not being cleaned at the end of each procedure, but rather at the end of the day.

In January, the Miami VA reported everything was fine.

Then came the patient letters. Over a 3-day period starting February 10th a total of 7500 veterans in Augusta and Murfreesboro were sent letters. Tennessee patients were warned that improperly assembled colonoscopy equipment might have exposed them to cross-contamination between April 23, 2003 and December 1, 2008.

At the same time, in February of this year the VA Center in Augusta warned 1100 patients that they might have been exposed to hepatitis B, hepatitis C or even HIV during endoscopic procedures at its ear, nose and throat clinic between January and November of 2008.

A month after that warning, between March 8th and 14th of this year the US Department of Veteran's Affairs issued an updated alert to all VA hospitals and clinics, directing them to check again for improper procedures and establish new training protocols.

It was during the course of this second inspection that the VA hospital at Miami found the problem there—two months after issuing the all clear back in January. On March 23rd, the Miami facility sent letters to 3,260 veterans with regard to possible exposure to infectious disease from colonoscopy procedures.

Health officials continue to make the point that despite such clear violation of standard practice and (one would assume) common sense the risk of infection from cross-contamination through equipment that has not been clean and sterilized from previous use with another patient, is low: 1 in 1.8 million.

And while it has been reported that the 16 who have tested positive for hepatitis have not, so far been directly linked to the colonoscopy/endoscopy debacle (in other words, it is unclear as to whether the hepatitis may have come from the tainted equipment, or from some other source)—the fact remains that 16 out of about 11,000 people have been affected.

That's much worse than the reported odds.

A spokesperson for the VA said that "we take full accountability," according to Katie Roberts, who spoke to the issue. "We potentially put them at risk." She did not say whether, or not the VA would be willing to pay for treatment.

Nor did she reveal if the VA would be prepared to pay for damages. That's a question best left to a qualified lawyer. Veterans, who attend clinics for proactive examinations and procedures, should not be exposed to potentially life-threatening diseases due to the alleged negligence to adhere to sound medical and sterility procedures. In an editorial, the Miami Herald calls the oversight stunning and completely unacceptable.

"Putting lives at risk through carelessness is inexcusable."

If you have suffered losses in this case, please send your complaint to a lawyer who will review your possible [Veteran Medical Malpractice Lawsuit] at no cost or obligation.
Request Legal Help Now