Variable Annuities Not For Everybody

If you've purchased variable annuities, you need to ask yourself whether or not you actually need them. As it turns out, not many people benefit from investing in variable annuities. In fact, according to a study conducted a few years ago by Charles Schwab, only long-term investors that are in high tax brackets and have already filled every other retirement option need variable annuities. 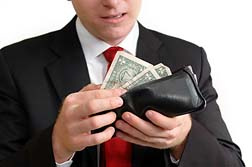 So, if you do not fall into that category, you may not benefit from your variable annuity, which is a bad thing, considering the expenses you are likely paying. Those can include close to $30 a year for contract fees, 1.3 percent a year in insurance expenses and fees to subaccount managers. Furthermore, if you withdraw your money at the beginning of your contract, you could face a hefty 9 percent charge, not to mention the 10 percent tax penalty you face if you withdraw money before you are younger than 59 1/2 years old.

You may be asking yourself why, if you don't fit into the group of people who benefit from variable annuities, your broker pushed you into them. The answer is, of course, money. Variable annuities can make a lot of money for unscrupulous brokers who want to make as much money as possible. That means that the unsophisticated investor may be pushed into the annuities, whether he can benefit from them or not.

However, one major problem is that some people do not even realize they have variable annuities. USA Today cites one couple who transferred their IRAs at a bank in 2000. When they were 74-years-old, because they hadn't gotten a statement about their account, they went to the bank to find out what happened. Turns out, they purchased a variable annuity without knowing it. The bank salesman did not use the words "variable annuity." Later, the couple moved their money to a different bank, where a clerk suggested opening a variable annuity. Like the previous time, the clerk made the suggestion without actually using the word "annuity."

A danger with variable annuities is that the money has to be in them for a long time for the investor to benefit. That can run up to 20 years, which makes variable annuities pointless for people who are close to retirement or may need the money sooner than that. Taking the money out too soon can result in high penalties.

More VARIABLE ANNUITIES News
Unfortunately, senior citizens have been targeted by those unscrupulous advisors as perfect for variable annuities. These unethical advisors often do not tell them about the risks associated with the annuities or the large commissions, hidden fees and high charges for early withdrawal. It is only after they have invested in the annuity—and when they need the money—that the seniors learn the variable annuity was not right for them.

If you have a variable annuity, it is important to ask yourself if you really need it. If you are not in the group mentioned previously in this article, there's a chance you do not need your variable annuity. There's also a chance you've been sold something completely unsuitable for your investment profile.

If you have suffered losses in this case, please send your complaint to a lawyer who will review your possible [Variable Annuities Lawsuit] at no cost or obligation.
Request Legal Help Now