Truck Accidents: It's Bound to Get Worse

The dump truck crested the hill travelling way too fast. Yes, it's a truck accident. And the truck, too big and too fast, could not avoid colliding with the line of cars stopped along the interstate at the behest of a road crew.

The Lincoln at the end of the line took the brunt of the damage, and drove it into the car in front carrying this writer's father. The domino effect crunched dozens of cars into each other and the resulting chaos closed the highway for hours. 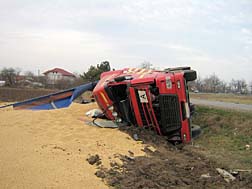 Thankfully, no one was killed, but there were serious injuries. Dad was confined to bed, in traction, for a month. The car was a write-off. The truck driver, as is most often the case, walked away unscathed.

As serious as it appeared, it could have been far worse. The dump truck could have been loaded. As it was, the young driver was speeding back to the depot, empty, in order to secure another load of gravel. In the ensuing investigation, it was determined that he was being paid a premium for each additional load he managed to haul in a day. With dollar signs in his eyes, he matted the accelerator.

It would be grossly unfair to label the industry according to the actions of the irresponsible few. The majority of truck drivers are skilled, responsible and sometimes - in the face of calamity - heroic and put their own safety in jeopardy by avoiding a line of traffic and ditching the truck when a collision appears imminent.

The fact remains, however, that there are more trucks on the road than ever before - and the trend will continue. Loads are getting longer too, with more tandem rigs on the road. The latter suggests that they're getting heavier, and that includes the rigs that are overweight illegally (read dollar signs), putting undue stress on the truck's mechanics and structure. A poorly maintained truck (again, read $$$) is even more susceptible to collapse under excess weight. And on a busy highway, the collapse will take out several cars with it.

Some drivers, who shouldn't be behind the wheel at all due to traffic citations or health concerns, are allowed to continue in their jobs.

Such was the case in a truck accident that claimed the life of a Lake Station woman, whose car in which she was a passenger was struck from behind by a semi-tractor trailer rig. The driver of the truck, who amazingly was not named in the resulting lawsuit as a defendant, is known to have a history of traffic violations, including violations in a commercial vehicle and numerous citations for speeding.

It is alleged that the truck driver was speeding at the time of the collision. His employer is named in the lawsuit, filed in U.S. District Court in Hammond on June 1st. The lawsuit claims that Landstar Ranger, a hauler based in Jacksonville, Florida, either knew or should have known the history of its' driver, Bruce Patterson, 53, of Portage.

Jacquline M. Rushing, 38, was killed while riding in the passenger seat of a car driven by her mother. According to the lawsuit, the car stopped in gridlock on U.S. 20 westbound, was attempting to merge into the passing lane and had signalled for about 20 seconds before making the turn. That's when, the suit alleges, the semi truck 'came flying up from behind and tossed the other vehicle off the road.'

Rushing's mother was seriously injured in the crash. The plaintiffs are demanding a settlement in excess of $75,000.

They'll probably get it.

In mid-afternoon on a bright July day in 2005, a wife and mother of three children was walking home from work in a Los Angeles suburb when she was struck and killed by a city-owned garbage truck. The family of Sofia Ruiz Morales launched a lawsuit against the City of Los Angeles shortly after the accident happened, and on June 6th a settlement was announced.

A truck accident is a severe and often complex event, and the investigation into one is equally complex. Issues such as load weight and configuration, mechanical soundness of the truck, the experience of the driver, and the dynamics that led to the accident are all taken into account.

It's no secret that many accidents are caused by car drivers unaware, or unconcerned with the stopping and manoeuvrability requirements of a larger vehicle several times heavier. Many truck drivers tell horror stories of being cut off by cars, or of autos pulling directly in front of a large semi and then slamming on the brakes, with often disastrous consequences.

So it can happen both ways.

More News
One thing is for sure - it's bound to get worse. With rising fuel prices, cars are getting smaller. Micro-wagons and hatchbacks, once the dominant force in the fuel-starved, service-station-line-up era of the 1970s, are making a comeback. SUV sales, which are still strong right now, are expected to trend downward.

As cars become smaller and more lightweight, trucks are getting heavier. It's a deadly combination.

When the young dump truck driver crested the hill and crashed into the gridlock of cars containing-- among other people-- this writer's father, the year was 1970. Cars were much bigger, with robust frames and plenty of sheet metal.

Imagine if that accident were to happen today, with the new brand of smaller cars?

Currently, there are 2.7 million trucks on America's roads. In nine years, that number is expected to hit 3.7 million by the year 2016. With even heavier truck traffic, heavier trucks, and lighter cars, the risk of injury or death only increases.

As will the workload of those in the legal community.

If you or a loved one has suffered from a truck accident, please contact a [Truck Accidents Lawyer] who will review your case at no cost or obligation.
Request Legal Help Now