Deaths of Two People in Truck Accident Could Have Been Avoided

Early afternoon on April 16th, a fatal truck accident occurred on Route 9, killing a 29-year-old man and a 31-year-old man, both residents of Readsboro. They were killed when their pick-up truck got caught between a guardrail and a Readsboro. The 42-year-old man who was driving the tractor-trailer could be facing as much as 15 years in prison if he is convicted. He is currently charged with a felony.

State Police Cpl. Gary Shuhart, who arrived at the scene of the accident a few minutes after it happened, remembers seeing a pick-up truck crushed between the truck and the guardrail, and a white 1997 Ford Escort station wagon sat wedged between the top of the truck and the guardrail. According to a spokesperson for the Crash Reconstruction Team of the Vermont State Police, the man driving the tractor-trailer was heading west on Route 9 when the rig tipped over and collided with two vehicles coming from the east. 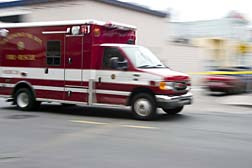 The driver of the white station wagon, a 53-year-old man, had to be evacuated by helicopter to Albany Medical Center Hospital. On Thursday he was still listed in critical condition, according to the police.

The investigation has shown no evidence that either the pick-up truck or the white station wagon were in the wrong--both vehicles were in the right lane, and had nowhere to go. They were hopelessly caught between the rig and the guardrail.

Woodford Mountain has a steep decline, and consequently several signs have been posted to alert truck drivers to gear down on that stretch of road. The speed limit on that section of Route 9 is 50 miles per hour. However, the driver of the tractor-trailer hadn't geared down--he didn't like to downshift--so he proceeded down the hill in ninth gear. He told the police that at the time of the accident he was doing less than 40 miles per hour. However, a witness driving directly behind the tractor-trailer remembered the rig traveling at between 55 to 60 miles per hour, and 'didn't slow down until it was into the curve.'

In addition to not slowing down, the driver of the tractor-trailer had not secured his 43,000-pound load of paper, which he had picked up just hours before in Brattleboro. So the load shifted, causing the truck to tip over. Not securing the load is violation of federal regulations.

More News
As it turns out, the driver of the rig had has his licence suspended five times between 1996 and 1998, four of those suspensions had to do with insurance. But there's no record of driving under the influence, and there was no evidence he had been drinking the day of the accident. Nevertheless, given his track record, it could be said that the driver of the truck was lucky up until this point - he hadn't been involved in any accidents.

The driver--the defendant--pleaded innocent to the charge of grossly negligent operation of a motor vehicle resulting in a fatality, but the judge set bail at $50,000, not only reflecting the seriousness of the crime, but also the fact the driver is flight risk. The families of the two slain men are hoping their lawyer will help bring justice and closure to this dreadful and completely avoidable tragedy.

If you or a loved one has suffered from a truck accident, please contact a lawyer involved in a possible [Truck Accidents Lawsuit] to review your case at no cost or obligation.
Request Legal Help Now