Trasylol Bad for the Heart and Kidneys, 10 Times More Expensive than Alternatives

A drug designed to inhibit bleeding during surgery is proving to have serious side effects. Trasylol, made by Bayer AG, can have an impact on the heart and kidney - leaving some patients on kidney dialysis, others with heart problems, and still others dead from the side effects association with Trasylol.

A product derived from bovine lung tissue, Trasylol is the market name for aprotinin injection, and was introduced in 1993 to aid in surgeries. To that end it has proven to be effective as a preventative against blood loss by inhibiting enzymes in the blood, which increase the risk for bleeding. Patients undergoing coronary artery bypass grafting could be at risk for bleeding due to a predisposed condition, or prior use of anticoagulants. Trasylol has been used extensively as a bleeding inhibitor, even since. 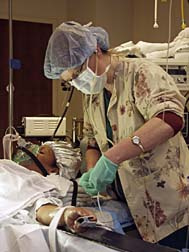 However, in January of last year - 13 years after the introduction of Trasylol - concerns began to emerge and all, it seemed, at once.

Three different studies linking Trasylol to kidney failure, heart attacks and stroke, and the potential for clot formation within the coronary bypass grafts. Two Trasylol studies suggesting side effects came out within days of one another: a report in the on-line edition of Transfusion on January 20th, 2006 - and six days later a similar study published in the January 26th edition of the New England Journal of Medicine (NEJM). Their respective conclusions were a bit different, however. While both studies warned of the potential for kidney damage, only the report in the NEJM identified a risk of heart attack and stroke, in addition to the possibility of kidney failure. The Transfusion report pointed to the kidney only.

The studies didn't need to match for the FDA to act. Two weeks later, on February 8th 2006, the U.S. Food and Drug Administration issued a public health advisory, warning the medical community to limit further use of Trasylol until an advisory committee could be convened.

That public meeting was convened on September 21st of that year. On that day members of the Cardiovascular and Renal Drugs Advisory Committee debated the risks based on the two January studies, as well as a worldwide safety review conducted by the manufacturer, together with its own post-marketing database. Recommendations for changes to the product labelling were brought forward.

Six days later, on September 27th, the FDA was informed by Bayer AG of yet another safety study. Preliminary findings from that study confirmed the potential for serious kidney damage. Beyond that, Trasylol had the potential to bring on congestive heart failure, stoke, and in general could actually increase the chance of death.

However, there is more to this story. When the FDA first issued its public advisory in February of that year the manufacturer, Bayer AG based in Germany, disputed the findings. Bayer was still holding that position in September 21st during the public session of the Cardiovascular and Renal Drugs Advisory Committee. When the manufacturer issued the additional study six days later, there were suspicions that Bayer had purposely held back important information.

The manufacturer denied the withholding charge, but then later reprimanded and eventually suspended two Bayer employees for doing just that - withholding documents.

More News
In the wake of the controversy, Bayer discontinued three studies designed to foster new uses for Trasylol. The company maintains that the abandonment was not due to any findings relating to safety.

Trasylol has been on the market for 14 years, and may have been administered to as many as one million patients over that time. Studies have shown that Trasylol use has the potential for doubling a patient's risk of heart failure, together with a 181 per cent increased risk of stroke.

And Trasylol is far more expensive than alternative drugs which have proven safe and effective. Lysosine analogues, aminocaproic acid and tranexamic acid are not only ten times cheaper than Trasylol, but they also have the potential for reducing dialysis complications by 11,000 per year, save $1 billion in kidney dialysis costs, and reduce overall the costs of blood controlling drugs by $250 million.
READ ABOUT THIS LAWSUIT