Despite Train Accident Safeguards, Safety Runs Off the Rails

The California train wreck September 12th that killed 25 and injured 135 was a train accident that could have been prevented in a number of ways, Senators were told during a hearing this week. Even though it is becoming clear that the Metrolink train crash occurred after the engineer missed seeing a warning signal because he was using his cell phone, the cause of the train wreck could carry a number of interpretations. 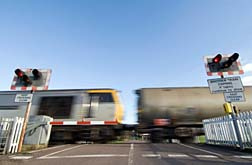 For instance, the absence of a sophisticated accident warning system that is employed elsewhere in the country and is available to any rail operator, in any jurisdiction with the means to implement the safeguard. However, during a State Senate hearing on rail safety, Union Pacific—the operator of the freight train that was involved in the head-on train crash with the Metrolink commuter train—pledged to install 'positive train control' in Southern California by 2012.

In the aftermath of the train wreck, President Bush is expected to sign a Bill into law prior to the end of his term in office that would require all rail lines in the nation to install advanced safety systems by 2015. In pledging to install positive train control by 2012, Union Pacific would be advancing that deadline by 3 years.

That said, it was reported in the Los Angeles Times this morning that State regulators expect to need some help from federal regulators before successfully realizing the installation, citing the concern that an already-crowded radio spectrum would make it a challenge to communicate with nearby trains unless more space is allocated on the system. State lawmakers have also been warned that Union Pacific might need some funding help to get the system up and running.

It was a horrific scene on September 12th when the train accident occurred, sending a Metrolink commuter train hurtling into the path of a Union Pacific fright train. Los Angeles remains an extremely busy port, with freight trains and commuter carriers regularly sharing track space in Southern California.

There are various systems already in place that help to ward against a similar train crash, such as a network of signal lights and mechanical switches. However, for the switches to work a train would have to be slowed and the engineer is required to heed a signal light, warning of an approaching train from the other direction. After brakes are applied, the mechanical switch can shift the train to a different track, avoiding a collision.

In the case of the Metrolink commuter train wreck, the engineer did not heed a warning light signaling the need to slow down, and the speeding train snapped the mechanical switch like a cookie.

The positive train control system combines GPS technology with digital communications to continually monitor a train's location, and speed. Were an on-board engineer fail to respond to signals along the track, the system would automatically sense danger and apply the brakes.

Union Pacific told State lawmakers in California that it hopes to have the technology installed on 60 miles of track between downtown LA and Riverside. Another operator, Burlington Northern, plans to have 66 miles of track in its rail system between Santa Barbara and Los Angeles hooked into the system by 2012.

In an effort to avoid a repeat of the carnage that came out of the train crash of September 12th, Metrolink has pledged that it will add a second engineer to many of its commuter trains. While State legislators applauded the news, distrust and frustration amongst lawmakers remain. "One of my findings has been that industry groups candidly get too cozy with the people they're supposed to regulate," said Sen. Dianne Feinstein, the federal Democrat from California, in comments appearing in the LA Times. "That's a problem and it's got to stop."

State officials are equally unhappy. "It's so frustrating. (Safety systems) have been around so many years," said California State Senator Alan Lowenthal (D-Long Beach). "We're delivering goods throughout the nation and yet our residents are not safe."

More TRAIN CRASH News
The failure of rail companies in the congested southern California system to install positive train control before now may surely enter into any pending litigation over the Chatsworth train crash. However, attention continues to be focused on the engineer of the doomed train. It has been reported that he was sending, and receiving text messages on his cell phone in the minutes leading up to the train wreck. It has also been reported that engineers are not allowed to have personal communication devices with them in the control center of the train—or, at the very least, are not permitted to use such devices while a train is moving. However, it has been suggested that the rule is not actively enforced.

Perhaps, if it was, a horrific train accident could have been avoided.

If you have suffered losses in this case, please send your complaint to a lawyer who will review your possible [Train Crash Lawsuit] at no cost or obligation.
Request Legal Help Now