Mold: It's Common. And it Can be Very Dangerous

It may surprise some that household mold is about as common as the dust bunny under the bed. However, no one would dispute the risk to health presented by toxic mold exposure and, more specifically, toxic black mold that can cause myriad health problems. 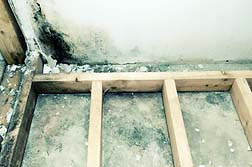 In fact, according to the Centers for Disease Control and Prevention (CDC), a globally recognized authority on disease control and health based in Atlanta, molds unto themselves are not toxic. Some, however, including Stachybotrys chartarum (black mold), can produce mycotoxins that can prove adverse and even dangerous to human health.

That said, there are very few reports, according to the CDC, that toxigenic molds found inside homes can cause unique or rare health conditions such as pulmonary hemorrhage of memory loss. The case reports, says the CDC are rare and "a causal link between the presence of toxigenic mold and these conditions has not been proven."

However as common as mold is (according to the CDC, "there is always a little mold everywhere – in the air and on many surfaces"), the fact remains that mold has become a 4-letter word for most and especially those with health conditions that cause them to be sensitive to mold.

And mold as the basis for litigation is spreading through the court system, as plaintiffs sue landlords, contractors, vendors, real estate agents and others who are accused of being responsible for the growth, or conditions fostering the growth, of mold spores in homes, public buildings and work environments.

Even insurance companies are affected.

A now-famous landmark ruling at the start of the new millennium against Farmer's Mutual Group originally saw a Dripping Springs, Texas couple awarded $32 million after they alleged that their insurer tarried too long in responding to a water leak in their 22-room mansion. The resulting delay in carrying out repairs and remediation allowed for the growth of Stachybotrys chartarum in their home, which in turn was alleged to have damaged their family's health.

Melinda Ballard and her husband Ron Allison alleged they had to flee their home in 1999 after the spread of toxic black mold made the structure uninhabitable.

The award was later reduced in late 2002 by the Third District Court of Appeals, which ruled that a Farmer's affiliate violated the state Deceptive Trade Practices Act, but did not commit fraud.

And while the CDC holds that household mold is common, the risk for toxic black mold and resulting toxic mold exposure ensures that no one can afford to take chances with their heath, or their liability.

If you have suffered losses in this case, please send your complaint to a lawyer who will review your possible [Toxic Mold Lawsuit] at no cost or obligation.
Request Legal Help Now

Posted by
Debra
on February 28, 2016
So sorry for your mold experience.. I've been affected also n its been a battle trying to get people to understand the magnitude of mold exposure..I lived in mold for 1yr n some months..nothing was ever done as far as remediation only cover-up.. I had a Mold Technician test results.. Severely containment n asperquilles/penicillin..Very toxic..I'm on a cpap..breathe shortness..depression.had biopsy my nose turned black it was fungus.rashes..n now my hearing is bad..Dr always say maybe mold but every test they thought it could be came back normal..so what??..I pray I get better I'm tired of fighting sometimes but won't give up..God bless you..
Posted by
Stacey Del Bucchia
on March 2, 2015
I lived in a room in Anaheim in 2009 that became infected with black y green mold. Within weeks I was constantly sick with the flu...colds...headaches pin pricking...nausea...vomiting...diarrehea...dizziness...foggy brained...fainting...abnormal bleeding..,.and so on...I went to the doctor they found nothing...xrays? Blood tests...nothing they thought it was a virus too many antibiotics made it worse...I have moved up to Nor Cal threw out so many items...clothes...furniture ...starting over y over. I found the website for toxic mold what a godsend...started with brown seaweed...candida cleanse several times...antioxidants, antifungals,anti inflammatories...all natural...whole food diet cut out processed food ...no meat...on y on...last year a lovely woman told me about 35% food grade perioxide so amazing...i am on maintenance treatment I use it to clean veggies...in a bath after shower y so on...I have been using Nutribullet for 8 months also so healing....It is now March 2015 there seems to be elements of mold everywhere I move? I am now low income...no health insurance...lost my career...my cat just passed who was infected...,it is still a struggle some days good...some bad...i do yoga...meditation...am spiritual have strong faith in God...I do not know the permanent damage but I know it is something...my brain is not as sharp I forget alot y still have troubles with chronic fatigue. I was always a A type personality...was successful...always thrived in business y personally y now it is mind blowiing how disabled I became. I am also Bipolar and take meds...trying to balance physical y mental challenges are difficult...i am divorced and alone ....I. praying for a miracle! I was not able to get a lawsuit going another long story...Toxic Mold is real...it is life threatening and from my research there are so many suffering yet still in silent...many are told it is in your head....I am proof yes I have a chemical inbalance in my brain...i am not crazy...this toxic mold that I have been fighting is real!! I beg the CDC to take action and please support the people....when money is more important than peoples lives there is a serious problem with humanity...god bless the ones who never become infected...but others like myself have had to wake up to the harsh reality that this illness is serious...changes your entire existence...managing the symptoms is all I can do while I still struggle to survive....I hope y pray to be a testimony of overcoming y healing of toxic black mold....Blessings y peace. Stacey