A 31-year-old woman was reportedly forced to abandon her business and home because of household mold that was found in her attic after she left. 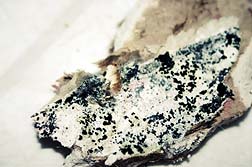 Jennifer Parker, who resides in South Jersey, found that wherever she went, she would get sick, MyFoxPhilly.com reports.

The illness reportedly left a multitude of doctors scratching their heads, forcing Parker to continue to ask health professionals about her unusual symptoms, which ranged from nausea to memory loss, as well as developing pink fingerprints.

Finally, one Texas doctor diagnosed that Parker was suffering from a reaction to a deadly household mold.

"I didn't know that the mold was growing in my home because I couldn't see it," Parker told the news provider. "It was up in the attic."

Since being diagnosed, Parker said she is now allergic to household chemicals that can be found in "everything from upholstery to detergent." She claims the toxic mold exposure has left her immune system weakened.

To avoid the household mold problems she's experiencing, Parker moved into her parent's backyard in a tent to keep her away from the chemicals she's allergic to. Through treatment, it's expected she will make a 70 to 90 percent recovery in six to eight months.

If you or a loved one have suffered losses in this case, please click the link below and your complaint will be sent to a personal injury lawyer who may evaluate your Toxic Mold claim at no cost or obligation.
Request Legal Help Now

Posted by
Lori
on June 18, 2012
I'm an expert when it comes to mold. I lost everything to mold! I moved again and again.

I have nodules on my lungs, and I'm left with 24% hearing in my left ear.