In the aftermath of the Topps beef recall, one of the largest beef recalls in US history, a number of problems have been identified that may, ideally, serve to improve safeguards and prevent illness and similar recalls from happening again.

However, the very convenience of frozen foods only adds to the problem, and dictates that safeguards at processing and production points need to be practically foolproof.

Topps ground beef recall, which scuttled the New Jersey-based meat processor and forced it to close after several decades of operation, amounted to over 21 million pounds. Not only was it one of the largest recalls ever, but it only added more misery to a year that saw well over a dozen recalls, as consumers kept falling ill after eating tainted meat. 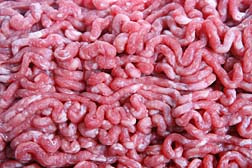 A number of issues are being investigated in the Topps beef situation, including conditions and protocols at the plant, and the failure of federal inspectors, apparently present at the plant daily, to identify problems literally, right under their noses.

It has also been suggested that the recall could have been carried out much sooner than it was.

The US Department of Agriculture (USDA) announced the initial Topps recall on September 25th (it would be expanded later). However, the agency admits that the first positive tests for E coli came back September 7th, nearly three weeks before the recall went out.

A lot of people could have, would have eaten a lot of Topps ground beef, in three weeks.

However, the tainted beef trail goes back even further, to July 5th—when the first case of food poisoning linked to Topps ground beef was first reported in Pennsylvania. True, that is only one person, in one state. One could argue that an agency could not, should not alarm a nation over the illness of one individual.

However, it was the beginning of a trend. Another illness was reported three days later in New Jersey. In August and early September, cases were reported in Connecticut, Maine, Florida, Indiana, Ohio and New York.

It is thought that the Florida report could be interpreted as the earliest date by which Topps ground beef could be implicated. In mid-August a 15-year-old girl consumed a Topps burger that had been purchased two days before. The adolescent fell ill two days later and was hospitalized August 23rd. E coli was diagnosed August 26th, one month less a day before the recall was announced.

The girl's mother notified authorities on August 28, after which specimens were removed from the family's freezer. Frozen patties from an open package of frozen Topps ground beef patties tested positive for E coli by September 7th.

However, it took another seven days for those test results to be confirmed, and it wasn't until September 22nd that authorities had in their hands preliminary results that suggested the Topps beef might have caused the illness. It took another three days to confirm those findings, before the New York State health department issued an alert, in tandem with the recall announced by the USDA.

A spokesperson with the agency's Food Safety and Inspection Service notes there is room for improvement. Among the improvements needed, is a way to ensure that recall information is effectively communicated to retailers, and follow-up is done to ensure the tainted product is removed from store shelves.

One woman in New York reportedly spent five days on her bathroom floor, sickened by tainted Topps ground beef, before she finally rallied and took the remaining patties back to her grocer.

Turns out the grocer hadn't even heard of the recall. Worse, he was still selling boxes of patties included in the recall, a month after the stamped sell-by date.

It has also been pointed out that even though most people by now have heard about the Topps recall, given its size and scope, most would not be aware of other brands that were manufactured by Topps and included in the recall: Shop Rite, Pathmark, Sam's Club, Kohler, Rastelli's, Roma, Sand Castle and Westside.

Beyond that, there is the inherent trust that consumers put on frozen food. Beyond any concern that a power outage, or a mechanical breakdown in a freezer unit might have compromised food, sustained power and a sound freezer unit combines with the hard 'clack' of a well-wrapped frozen piece of food to afford a false sense of security. Many consumers ignore, or are not even aware of sell-by, or best-before dates when it comes to frozen foods. Frozen patties especially, which are easy to handle and easy to prepare, are a staple of busy families that may not catch news of a food recall.

There is no way of tracking food once it leaves the store shelves. Save for matching up a UPC code with a debit or credit card, or a sales receipt, there is little a retailer can do once the food leaves the store, and certainly no requirement on his part to track the items after they have been sold.

It is therefore incumbent upon the manufacturers, suppliers, and the various regulators and agencies to ensure that recalled products are removed from store shelves as required.

It is also important to ensure that contamination doesn't happen in the first place. The meat industry admits that it may have been lulled into complacency thanks to a decline in recalls over the past three years.

However, something happened in 2007. There have been 20 recalls this year alone, which matches the number of recalls in 2002 and is one shy of a record set in 2000.

Were it not for the capacity to freeze, recalled fresh meat would present a relatively short cycle, as it would have to be consumed within a few days of purchase. However, the advent of freezer food guarantees that there will be incidents of E coli illness long after the September 25th, 2007 Topps beef recall.

Long after the headlines have subsided, and consumers have cruised through Christmas and the New Year, someone will dig into their freezer for some hamburger patties and a quick dinner, only to wind up ill and potentially hospitalized by eating tainted Topps ground beef.

That could still be the case months from now.

E. coli 0157:H7 is the nasty strain that is such a threat to so many. While it has the capacity to make even the most robust extremely ill, most healthy individuals will recover after a few days. The sad part, however, is that it remains a particular threat to children, the elderly, and people with weakened immune systems.

More News
Many children have been hospitalized by consuming contaminated Topps beef. And little wonder. With busy families, frozen meat patties are a staple, and often brought out for a quick dinner. Thus, they are most popular with the very demographic that could be compromised in the worst fashion, by contaminated meat.

A move towards irradiation is a source of debate right now. While the process of radiating meat would effectively kill any presence of E coli, it is expensive and could affect the cost, change the color and alter the taste of meat. Purists would have a field day.

It is clear something has to be done. But what? As Michael T. Osterholm, director of the Center for Infectious Disease Research and Policy at the University of Minnesota says, "If you gave me a million, zillion dollars and said give me a plant that doesn't have E. coli...