The trouble with branding is that you sometimes lose sight of whose actually doing the manufacturing. And in the case of the recent Topps Meat recall, various lots of potentially tainted product sold under different trademarks may have confused some consumers—even some retailers—as to the condition, and the pedigree of the allegedly contaminated product.

In late September Topps, based in Elizabeth, NJ, endured one of the largest beef recalls in US history after consumers in several states fell ill with symptoms of E. coli contamination. The recall, which included 21.7 million pounds of beef and beef products, quickly sunk the company into bankruptcy.

When the recall was expanded in the early days of October, various other brands within the Topps meat family were tagged as potentially contaminated. These brands included Shop Rite, Pathmark, Sam's Club, Kohler, Rastelli's, Roma, Sand Castle, and Westside.

When a formal recall announcement goes out, details about brands and lot numbers are issued in a formal communiqué, which most newspapers will either print verbatim, or include in a detailed story. Other media may also, briefly, list the other brands. 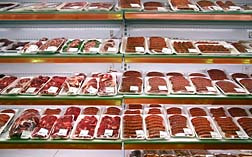 However, in both cases the foregoing will always be under the headline of Topps. After, all, Topps was not only the parent manufacturer—it is also a brand. Thus, Topps is in the headline and that's what people remember: the headline.

Rest assured, when the recall was issued back in the fall, most consumers would have checked their freezers for Topps products, as the name Topps was paramount in the media. However, unless they had the list of sub-brands and trademarks that may have been printed in the local paper, many consumers may not have been aware that the Sam's Club, or Pathmark or Shop Rite products in their freezer, were also part of the recall.

Indeed, it seems some retailers may have been confused. There was at least one report of one retailer having taken the correct steps of clearing out his freezer of the offending Topps recalled products, apparently unaware that other products in his inventory, carrying different brand names, were also manufactured by Topps and subject to the recall.

Such diversification of brands may make good business sense in the competitive food industry, as it is in many different sectors. However, it can be the subject of much confusion during a food recall. As common as the practice is today, many consumers still can't get their heads around the fact that their Shop Rite burgers were manufactured by anyone other than a company called Shop Rite—which doesn't exist. You just assume there is a company called Shop Rite.

And the media does a disservice to the consumer when it condenses, and consolidates a recall involving many different brands into one single headline for reasons of efficiency.
Thus, we are inundated with 'Topps', forgetting that there are other brands of product that should be getting equal attention, but are not.

More News
It may be equally confusing later this month when MSDT Acquisition puts in their bid, at auction, to buy the equipment and trademarks of the now-defunct Topps Meat Company, and to take over the lease at their facility in Elizabeth New Jersey.

Included in that bid by MSDT is the purchase of nearly two million pounds of potentially contaminated raw and processed meat that was part of the initial recall.
That's $190,000, according to the New Jersey Star Ledger, to purchase potentially bad meat, which, under US law, MSDT would be required to dispose of.

Only it wouldn't really be MSDT doing the disposition. Or would it? That's because MSDT Acquisition is an affiliate of Premio Foods, an Italian sausage maker based in Hawthorne, NJ.

No wonder people are confused.