Texas employment lawsuit may yield workers $5.5 million in back pay

A lawsuit claiming Texas labor laws were violated may bring former employees of a company backpay as well as what some are describing as a form of justice. 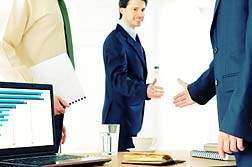 Lufkin Industries has been involved in a Texas employment lawsuit for most of the year, which one federal judge described in June as "unlawful discrimination in awarding promotions," the Associated Press reports.

More TEXAS EMPLOYMENT LAW News
Sylvester McClain, 62, was one of the former employees of the company who initiated the suit and said the possible $5.5 million that could come from the trial is a secondary goal.

The 107-year-old company reportedly employed a total of 1,200 workers. McClain told the AP that during his 36 years with the Lufkin Industries, racial discrimination was "a tradition" there.

Another employee, Buford Thomas, allegedly said there were signs designating "black" and "white" showers in one of the company's plants in the 1990s.

U.S. District Judge Ron Clark ordered the company to pay $5.5 million in damages, as well as the plaintiffs' attorneys' fees after 12 years of litigation.