More TEXAS EMPLOYMENT LAW News
Spurred by a failure to correct several hazardous safety violations at a Texas refinery, BP will be fined a record $87 million by the Texas employment law watchdog group, the Occupational Safety and Health Administration. 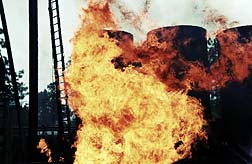 BP, who is formally contesting the decision, had requested additional time to meet the standards proposed by OSHA which included defective pressure relief systems that are partly responsible for a 2005 explosion that killed 15 workers and injured 170.

In addition to the explosion, damages sustained from hurricane Rita forced the factory to work at reduced capacity until full operations were restored after a $1 billion investment.

"The size of the fine will draw attention to the fact that OSHA is more serious than they have been in the past about insuring compliance for safety issues," said Andy Lipow, president of a Houston-based oil company. "Other refiners are looking at their situation and making sure they are in compliance."

The Occupational Safety and Health Act, a federally sponsored portion of Texas employment law overseen by the OHSA, ensures a safe work environment for all employees.