On December 12, the Crown announced that no charges would be laid against four RCMP officers in the Taser death of Robert Dziekanski. At the same time, the BC Criminal Justice Branch spokesperson disclosed that the Polish immigrant was Tasered 5 times and not twice as the RCMP initially reported. 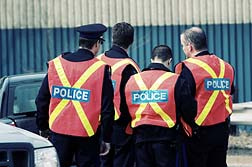 The prosecutors believe that Mr. Dziekanski died at Vancouver airport last year because he was in alcohol withdrawal, had a history of heart disease and was scared of flying, yet he had a full and sealed bottle of Polish vodka in his carry-on luggage. There was no evidence of alcohol or drugs in his system from the coroner's report. If Mr. Dziekanski was the degenerate alcoholic the prosecution made him out to be, wouldn't the bottle have been empty, given the fact that he had been traveling for 30 hours?

In BC the Crown makes the decision to determine whether charges will be laid and in the Dziekanski case, the Crown relied solely on evidence from the RCMP. But now that the CBC reported allegedly defective Tasers (models before 2005 were shown to emit 50 percent more electrical current) the ongoing public inquiry may have an entirely different outcome. Asked if the Taser used against Mr. Dziekanski was one of the models now withdrawn from use over concerns about a higher discharge, BC Criminal Justice Branch spokesperson Stan Lowe couldn't say. Lowe did say that Mr. Dziekanski was a victim of "sudden death following restraint".

Notwithstanding the CBC report, is there a better way for police officers to use force?

For the majority of the public in BC and throughout Canada, this decision is not satisfactory. In fact the word on the street is that people are not confident with the police force or the criminal justice system. The major problem lies with the fact that the police investigate themselves; of course they will invariably pass their police test but this incident has not passed the public's litmus test—and the public aren't agreeing with the prosecutors' portrayal of Mr. Dziekanski.

Neither is Poland's Consul General to Canada accepting the decision. "We are still waiting for real honest information about what was done in the airport," said Tomasz Lis. "My government must express great disappointment that charges will not be laid." Lis does not believe the RCMP-led investigation was based on truthful information and he suggested that the Polish government might try to lay charges against the four officers.

"We think it's a real conflict of interest to ask police to investigate their brothers and sisters," said David Eby, acting executive director of the B.C. Civil Liberties Association, noting concern that the Crown's conclusions were based on an investigation conducted by the RCMP. He noted that police are subject to civilian investigations in other provinces (namely Saskatchewan, Ontario and Quebec).

More TASER DEATH News
The second phase of the retired Justice Thomas Braidwood's provincial public inquiry will resume in January; it will comprise extensive consultations with experts and witnesses to examine the Taser death in greater detail. Witnesses have already gone on record saying Mr. Dziekanski did not pose a threat to anyone at the airport and Tasering him was not necessary. Countless people have seen the video (of the October 14, 2007 incident in a secure area of the international arrivals terminal) showing Mr. Dziekanski Tasered to death. At one point, he was holding a stapler in his right hand in the open position—apparently that was enough of a threat to justify 4 officers taking him down.

Mr. Dziekansk was shot by a lethal weapon and he died. If anyone else beside the police did this, they would be charged. This case cries out for a trial and the attorney general's office is under the microscope. If there is ever a time that a public inquiry is needed, this is it.