With the rising incidence of deaths by Tasers, a Canadian media network has commissioned an analysis of Tasers in an attempt to verify, or disprove their safety and reliability. The tests revealed problems with more than 10 percent of the devices tested, which were pulled from the stocks of US police forces at random and test-fired. Some didn't work at all, while others sent a current 50 percent higher than Taser said it would. Little wonder that Taser death is happening, given this latest development. An individual Tasered to death may very well have been hit with 50 percent more current, than recommended as 'safe.' 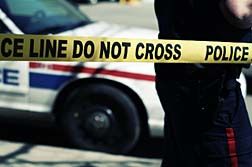 The Canadian Broadcasting Corporation (CBC) conducted the tests in association with National Technical Systems, an independent lab based in the US. A total of 41, 'X26' Tasers, currently in service with 7 police departments in the United States, were obtained for testing. Each Taser was fired six times.

Of the 41 Tasers tested, four of the units delivered a significantly higher level of current than that for which the unit was designed. In fact, analysts found that that the increased level of current, at a whopping 50 percent higher than normal, is higher than Taser International says is even possible.

The Taser is a stun device that was issued, and has been embraced by a host of police forces and law enforcement organizations as an alternative to service revolvers. Officers are trained to aim the device at an adversary's chest—in other words, straight to the heart. The electronic jolt delivered by the Taser is meant to temporarily incapacitate the individual, but is not designed to kill.

However with 4, of 41 Tasers—or 10 percent—delivering a significantly higher charge, there is concern with regard to how such a jolt would impact the elderly, children, or individuals with heart problems. People who either abuse drugs, or take prescription medications, are also at risk.

And yes, there have been documented cases where Tasers have been used on children.

Amnesty International, long a vocal critic of the Taser, believes that forces have quickly come to rely too heavily on the Taser, and is advocating more independent testing to verify their reliability, according to a report from CBC News/Radio-Canada.

"The fact that Tasers were firing above their specified limits then raises questions as to what of the thousands of Tasers that are out there across Canada and across the United States, how often are they misfiring," said Alex Neve, secretary general of Amnesty International Canada.

It should be noted that virtually all Tasers in service today are made by Taser International, based in Arizona. It should also be noted that the four Tasers that were found to be abnormal, were all made prior to 2005—which suggests they were among the earliest models.

Three of the Tasers didn't even fire at all, even with fully charged batter packs. The 3 failures were set aside and not counted in the final results, however the potential for a Taser to fail completely represents a risk this time, not to the target individual, but instead to the police officer.

Pierre Savard, a professor from the University of Montreal who helped design the test used, suggested that the 10 percent failure rate is significant. He also makes the point that Taser International, and the Taser device is not subject to the same degree of international standard as, say, communication devices like cell phones.

"When you use a cell phone, well, cell phones have to respect a set of standards ... for the electric magnetic field that it emits. The Taser, well, nobody knows except Taser International."

The capacity to distract people while driving notwithstanding, cell phones don't kill. The Taser has. Taser death has befallen many individuals, on both sides of the border. According to the CBC, Taser International has said in the past that the Taser is "safer than Tylenol."

More TASER DEATH News
"When you combine an increased current intensity with a dart that falls right over the heart for somebody who has cardiovascular disease or other conditions such as using drugs, for example, it can all add up to a fatal issue," Savard told the CBC.

A spokesperson for Taser International suggested the malfunctioning Tasers were an anomaly, which might be explained by a failure to spark-test the units on a regular basis.

Nonetheless, this latest news on Tasers represents a concern for critics worried over Taser death. Deaths by Tasers were never expected from a device meant to temporarily incapacitate, but have been found to do more harm. As well, a device meant to be used as the second-last line of defense next to a service revolver appears to have been used with greater frequency—even on children—and sometimes the helpless victims are brought into submission via the most final route possible.