In June 2008 the first lawsuit was successfully won against TASER International—the first out of at least 70 suits against the Arizona company that manufacturers M-26 taser guns. This lawsuit is extremely important because more than 300 deaths have occurred since 2001 where Tasers were involved. The obvious question is why, after so many Taser deaths have occured, is TASER (and/or its users) finally being held accountable? 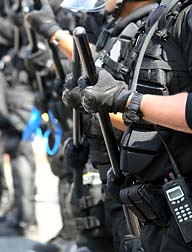 At the beginning on June, the company lost its first product liability claim in the United States when the courts found that TASER International failed to warn the police department that prolonged exposure to the device could increase the risk of cardiac failure. The company was ordered to pay $6.2 million related to the death of a California man who was hit multiple times with the weapon by police.

The company has marketed its product, the M-26 gun as an " advanced non-lethal weapon" but it may be time to re-brand this extremely dangerous weapon and better train its users—countless police officers have received their training directly from the manufacturer. And up until June 2005, the devices were marketed without adequate warnings of their dangers, including the risk of metabolic acidosis.

Metabolic acidosis occurs when the level of lactic acid in the blood increases: The Taser current causes severe muscle contractions which in turn causes the muscles to secrete lactic acid into the blood. If the body cannot compensate for increasing metabolic acidosis through normal breathing, blood pH can drop quickly—cardiac arrest can occur if it drops too quickly.

And that is what happened to Robert Heston in February 2005. The medical examiner attributed his death to cardiopulmonary arrest as "a consequence of the combined effects of the agitated state associated with methamphetamine intoxication and the TASER applications." Amnesty has documented his death and almost 300 more of persons dying shortly after being subjected to a TASER ECD discharge.

Why have so many lawsuits preceding the one this past June been dismissed? Because of several serious flaws in research. First, there was animal testing—canines were subjected to small discharges to the thorax; researchers were unable to induce ventricular fibrillation so TASER concluded it was safe. But as noted above, ventricular fibrillation was not the danger.

In another "test", about 900 healthy police officer volunteers were given short duration discharges from the M26; the discharges did not exceed a single 5-second activation and the officers were not under the influence of stimulant drugs or in a "state of agitated delirium, also known as "Excited Delirium Syndrome".

(Most individuals die from this syndrome during or immediately after their arrest and most are under the influence of illegal stimulants. But in cases in which deaths are attributable to this syndrome, an autopsy fails to reveal evidence of sufficient trauma or natural disease to explain the death: Excited Delirium Syndrome cannot be proven by objective evidence.)

Back to the death of Robert Heston. It wasn't until several months after his death, and those of many others, that TASER finally issued the following warning:

More TASER DEATH News
"Repeated, prolonged and/or continuous exposure to the TASER electrical discharge [and not one short discharge that was given to the police officers] may cause strong muscle contractions that may impair breathing and respiration, particularly when the probes are placed across the chest or diaphragm. [not the thorax as was discharged on canines]. Users should avoid prolonged, extended uninterrupted discharges or extensive multiple discharges whenever practicable in order to minimize the potential for over-exertion of the subject or potential impairment of full ability to breathe over a protracted time period."

No doubt Robert Heston and hundreds of other TASER victims would be alive today if this warning by the manufacturer (and if the users followed the warning) came sooner.