There is plenty of bad advice to go with all those stock market losses out there, and while most people cringe at the horror stories of well-meaning seniors taken to the cleaners by opportunistic brokers, there are cases of younger investors with a wider risk tolerance, stuck with unsuitable products foisted on them by vendors with dreams of commissions dancing in their heads. 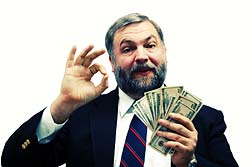 That's the time to fire your financial advisor. Heck, you may even want to sue him, too if the advice has cost you dearly.

Most investors cringe at the thought of having to actively pay an advisor for his, or her advice. Why bother going that route, when there are plenty of financial advisors who earn their keep through the commissions earned on products they sell? As such, their compensation isn't coming directly out of your pocket.

Or is it? It could be, if the products being sold aren't exactly right for you. And any financial advisor selling on a commission basis is going to have some form of bias.

"Everyone calls themselves a financial planner these days," complains Karl Amstadt, 53, in the current issue of Forbes magazine. "Most of them are just stockbrokers who want to put your money in stocks or insurance agents who want to sell you insurance." Amstadt runs an Internet marketing company in Cleveland, and his wife is a dentist. Between them they manage to drum up $30,000 in savings each year. Amstadt told Forbes that when he and his wife went shopping for a financial planner recently, they found one advisor who recommended putting all of their savings into whole-life insurance.

Hardly surprising to learn that the so-called 'advisor' earned commissions from selling that product. In the end the Amstadts found a fee-only advisor who created an unbiased financial plan for them. Fee-only advisors usually bill about 1 percent of your assets under management each year. Yes, you have to pay him. But he earns income solely from the strength of his advice, and the better your portfolio does, the better he does as well. It's a win-win situation.

But…and there's always a "But"…

Sometimes, though, even a fee-only advisor gets it wrong. Scott Stevens is an Oregon ophthalmologist who recently let go the asset management firm that was looking after the pension fund for his practice. Stevens recalled to Forbes that he had told his portfolio manager that his primary goal was to preserve capital. However he noted that as the stock market rose each year, the firm failed to rebalance in order to reduce the exposure to his equity.

Sure enough, by September the bear market had cost Stevens 10 percent of his $650,000 portfolio. When he raised the matter with his portfolio advisor, he was told that his stock allocation was conservative, and to just sit tight. Two months later the portfolio was valued at a mere $440,000—a drop of more than $200,000 in just a matter of months—and Stevens moved it to another firm.

An advisor affiliated with a large firm will often earn fatter commissions from selling products tied to their employer. Therefore, their motivation and own self-interest is at odds with your own. "These large firms are mostly sales mills," says the author of "The Big Investment Lie: What Your Financial Advisor Doesn't Want You to Know." Michael Edesess tells Forbes "there is constant pressure on advisors to sell products and maximize revenues." Conflicts should be fully disclosed, but all too often they are not.

And that's no help to you. In fact, it may hurt you in the end.

There are other practices that could cost you more, harm your portfolio, and serve as fodder for a bad financial advice lawsuit. If your portfolio is turned over a little too often, it just might be that such a turnover is actually generating income for the broker in fees and commissions. Beyond the shuffling that may be required this year to mitigate tax losses, too much turnover could be a sign that the broker is lining his pockets.

Ultimately, if a financial advisor is trying to foist an investment on you that makes little sense for your age and stage of life, be wary.

More STOCK MARKET LOSSES News
Take the story of Steven Trager, who is 62. He owns a pizza shop in Santa Monica. Two years ago he had $1.4 million from the sale of real estate to invest, and on the advice of an insurance agent who billed himself as a 'senior financial advisor' recommended Trager sink the funds into five equity-indexed annuities. Trager told Forbes magazine that he was guaranteed a minimum 3 percent annual return and that the policies, with Sun Life of Canada and Midland National, tracked the SAP and had earned 12 percent.

But the steak was nowhere near the sizzle. First, Trager wouldn't receive dividends. The potential gain was just a fraction of that of the SAP. There would be surrender penalties for 14 years, and gains would be taxed as ordinary income, and not as capital gains—so his tax hit would be higher.

Digging deeper into his annuity portfolio with the help of an independent wealth management firm, Trager learned that should the SAP return 12 percent, he would only earn 4 percent. The advisor, meanwhile, would stand to earn $125,000 in commissions.

Trager is trying to get his money back. And just maybe he should sue, too, with the help of a bad financial advice lawyer.