Where Will the Stock Loss Freefall End?

While the stock markets appear to be on an upswing, at least for now, there is no question that there have been significant stock losses in recent months. How significant? Well, Jeremy Gaunt, at Reuters, posts that the MSCI all-country world stock index has lost around $15 trillion in value since October 31, 2007.

He then puts it in perspective. "That is more than 21 times the $700 billion U.S. bank rescue plan. It is also more than the annual gross domestic product of the United States. It is more than three times Japan's annual output and more than four times that of Germany." 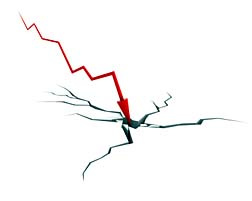 Those numbers are staggering, and made worse by the speed with which the declines happened. Gaunt says that about a third of the companies' losses occurred between mid-September and mid-October, 2008. So, it took these companies four years to make the $15 trillion and less than a year to lose it. That would be inconceivable, if we weren't here to witness it.

But it's not just companies that are losing money. Investors are suffering in this freefall, too. Their stocks, their pensions, just about anything they have money invested in, have been affected by the recent turmoil in the stock market. And even though the market is up slightly—very slightly—there is still concern that it could drop further.

Investors have been told not to panic—that the market will right itself and investments will rebound. But that is little comfort to people who have invested their life savings, believing in the stability of the market and other, supposedly safe, investments. It's also easy for the bigwigs to say, when many of them are relatively shielded from the stock crisis. It's harder to take when you are close to retirement and you see your savings slip away.

So, the question next becomes whether the stock market losses and drops in value in many financial institutions was simply the luck of the market or if people were actually misled as to the safety of their investments. If their investment loss was due to regular market fluctuations and the nature of investments, then there is nothing they can do except hope that their investments will bounce back.

More STOCK MARKET LOSS News
However, if their losses were the result of misleading information, bad advice or false marketing about the stability of investments, then they may be eligible to file an arbitration claim or a lawsuit. Lawyers are investigating whether some companies misled investors as to the stability of their investments.

Fifteen trillion dollars is a lot of money, obviously, but it is money that is being lost by many people who cannot afford to lose—people who thought they were putting their money in safe, stable investments. Are companies affected by the recent stock losses? Absolutely, they are. But the average person, the one who works hard to make a living and saves his money for retirement, suffers the most in situations like this. That's why it is important to hold companies, or advisors, accountable if the investor has been the victim of misdeeds.

If you have suffered losses in this case, please send your complaint to a lawyer who will review your possible [Stock Market Loss Lawsuit] at no cost or obligation.
Request Legal Help Now