Still reeling from the news that they may have suffered millions of dollars in stock market losses investors who entrusted their money to Bernard Madoff are scrambling to determine how much money they actually lost. Of course, they are probably still smarting from stock losses incurred as a result of the economic crisis, but it seems that nothing is worse than receiving bad stock market financial advice—except, of course, being outright lied to. 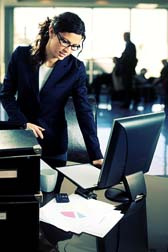 Bernard Madoff is now infamous for allegedly running a Ponzi scheme through his hedge fund. The Ponzi scheme involved billions of dollars from wide-ranging investors, including corporations, endowments, pension funds, individuals and foundations. Some experts believe that, at a minimum, $15 billion has been lost to Madoff's Ponzi scheme, which was only uncovered when Madoff admitted his actions to senior employees in his securities firm.

Apparently, it wouldn't have taken much to discover the truth. According to experts cited in Business Week, anyone asking even a few routine questions would have realized that Madoff used a three-person office as an outside auditor, rather than a nationally recognized firm. Furthermore, there was no third-party administrator signing off on the books—all that was done in-house. Now, investors are upset because many did not realize that their hedge funds' assets were mainly with Madoff. They may have heard about the Madoff scandal one night and not realized until the next day that Madoff had their money.

Meanwhile, some are also questioning why alarm bells didn't go off for regulators when Madoff's fund was able to consistently generate decent annual returns despite varied market environments. Financial magazines quoted experts as asking how Madoff got the returns he did, and some were uncomfortable with his strategies, but regulators did not take action against Madoff until December 2008.

More STOCK MARKET LOSSES News
According to the charges filed against Madoff, the trader paid off investors with money he did not have and hoped to distribute money to family and friends before turning himself in.

So, investors have to watch now not only for market conditions and for the risks associated with various investments, but also for traders and brokers who would give them misleading information to convince them to purchase an investment that is not necessarily suitable, safe or even legal. They may not even be able to trust that regulators will notice the red flags associated with an illegal operation and take appropriate action. And, they cannot trust that their hedge fund manager will give them necessary info as to where their money has been invested. All they can do is hope that, if something illegal does happen, they will be able to file a complaint and recover some of their lost money.