New Study Suggests Link Between SSRI Use and Birth Defects

A new study suggests that women who take selective serotonin reuptake inhibitors (SSRIs) during pregnancy are at a greater risk for having children born with birth defects. Although the study did not include the risk of persistent pulmonary hypertension of the newborn (PPHN), it did find an increase in another heart-related birth defect, known as a septal heart defect. Again, mothers are left to determine if the risk of SSRI side effects, including SSRI birth defects, is worth the benefit that taking SSRIs may provide. 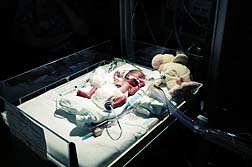 Researchers found that the use of Celexa and Zoloft early in pregnancy was linked to a small increased risk of a septal heart defect. This association was not seen in women who took only Paxil or Prozac.

More SSRI News
Researchers concluded that larger studies are needed to determine whether any SSRIs are safer to take than others during pregnancy. An editorial that was published at the same time as the study noted that the risk of harm to the child must be weighed against the risk of having untreated depression during pregnancy.

In August, 2009, a joint statement was released by the American College of Obstetricians and Gynecologists (ACOG) and the American Psychiatric Association (APA), issuing guidelines for the treatment of depression during pregnancy. Those guidelines included gradually reducing or stopping medications altogether for women with mild depression who have had few symptoms for six months or longer; using psychotherapy or other treatments as alternatives to medication for some women with depression; and continuing medication with women who experience psychotic episodes, have bipolar disorder or are suicidal.