SSRI Birth Defects –The Heart of the Matter

Atlanta, GA: Meredith was taking Zoloft for nearly 3 years, and in the third year she became pregnant. Her doctor told her she should be fine to stay on the selective serotonin reuptake inhibitor (SSRI) during her pregnancy, but to reduce the dose during the last part of her pregnancy. Her daughter was born with heart defects, and Meredith wonders if there's a connection between the drug and the heart-related birth defects. 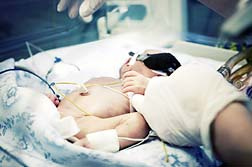 In fact Meredith's daughter was born early, with an irregular heartbeat. And her daughter will likely have to undergo surgery associated with her heart problems when she reaches the age of 5. She is being monitored and has already been to see specialists on a regular basis since her birth.

SSRI Birth Defects
Studies that revealed the possibility of heart defects associated with 2 antidepressant classes, SSRI and SNRIs (selective norepinephrine reuptake inhibitors), prompted the Food and Drug Administration (FDA) to issue a Public Health Advisory on July 19, 2006 regarding SSRI PPHN - persistent pulmonary hypertension in newborns (PPHN) resulting from the use of SSRIs during pregnancy.

The notice stated " The FDA has asked the sponsors of all SSRIs to change prescribing information to describe the potential risk for PPHN...Babies born with PPHN have abnormal blood flow through the heart and lungs and do not get enough oxygen to their bodies....Babies with PPHN can be very sick and may die."

The alert was based in part on findings from a study which showed that infants born to mothers who took SSRIs after the 20th week of pregnancy were 6 times more likely to have persistent primary hypertension of the newborn (PPHN) than infants born to mothers who did not take antidepressants during pregnancy. The FDA alert also stated, "Neonatal PPHN is associated with significant morbidity and mortality."

Paxil and the Risk for PPHN
The FDA also warned pregnant women and their doctors of an increased risk of heart defects in newborns when taking the antidepressant Paxil (also known as paroxetine). The FDA reviewed 2 studies which found that women who took Paxil in the first 3 months of pregnancy were 1.5 to 2 times more likely to give birth to a child with a heart defect than women who took other antidepressants or pregnant women overall.

More SSRI BIRTH DEFECT News
Along with the warning, the FDA placed the drug into its second-highest category for risk of birth defects, advising patients that "this drug should usually not be taken during pregnancy." In a later warning, the FDA said that Paxil "should generally not be initiated in women who are in their first trimester of pregnancy or in women who plan to become pregnant in the near future."

Unfortunately, SNRIs carry the same warnings about use during pregnancy and risk for heart defects as SSRIs. If you're taking it and are thinking of becoming pregnant you may want to ask your doctor or health care professional about the possibility of birth defects, specifically heart-related problems.

If you have suffered losses in this case, please send your complaint to a lawyer who will review your possible [SSRI Birth Defect Lawsuit] at no cost or obligation.
Request Legal Help Now