More Democrats than Republicans are supporting the Mother's Act. The increased campaign funding to Democrats may well explain this turn of events. For the last eight election cycles the pharmaceutical industry has contributed far more to Republicans than Democrats. In the 2006 cycle the percentage was 28% to Democrats and 70% to Republicans, according to the Center for Responsive Politics, a nonprofit group that tracks political funding. 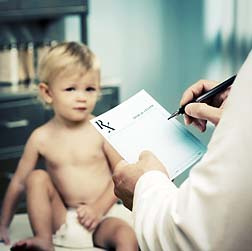 But the Democrats were close to matching the Republicans for the 2008 cycle with $5,099,942 to Democrats compared to $5,680,871 to Republicans, which is probably why the Democrats would allow such an obvious drug marketing scheme to be implemented.

"The Mothers Act, while appearing like an Act of benevolence, is a dangerous and unnecessary measure that will result in the further over-prescription of drugs that are already grotesquely over-prescribed," says Kate Gillespie, one of the lead attorneys handling SSRI birth defect lawsuits and Paxil suicide cases at the Los Angeles based Baum, Hedlund, Aristei & Goldman law firm.

"The Act is a slippery slope," she warns, "toward the forced drugging of women of childbearing years with drugs of questionable efficacy and serious safety issues effecting mothers and their innocent children – drugs that can cause horrific side effects, including, suicidal behavior, violence and devastating birth defects."

"Of course, mothers who truly cannot cope should be helped," Ms Gillespie says, "but do we really need legislation requiring mothers to be screened and drugged?"

"Take out politics and Big Pharma and the push for this legislation just doesn't make sense," she states.

"For politicians, a much safer issue than pushing drugs for pregnant mothers is promoting the expansion of medical treatment for postpartum depression," according to Dr Levine.

He says the Mother's Act "omits relevant truths" about Melanie Blocker-Stokes, the woman the bill is named after, and the following information about her suicide should be made known:

"Blocker-Stokes... did in fact receive extensive psychiatric treatment. She was hospitalized three times in seven weeks, given four combinations of anti-psychotic, anti-anxiety, and antidepressant medications, and underwent electroconvulsive therapy (electroshock). But despite her psychiatric treatment -- or because of it -- Melanie Blocker-Stokes jumped to her death from the twelfth floor of a Chicago hotel."

Money-making promoters behind the Act

Katherine Stone runs an internet website called "Postpartum Progress" and posts a daily blog. She also serves on the board of Postpartum Support International as the public relations outreach chairwoman. Her Bio says she "is a nationally-recognized, award-winning advocate for women with perinatal mood and anxiety disorders."

On another page titled, "The Art of Psychiatric Medication," Katherine tells women to hang in there if a medication does not work because for her diagnosis of OCD, she states:

More Pregnancy Pharmaceutical News
"I've taken many medications, including Effexor, Celexa, Seroquel, Risperdal, Wellbutrin, Luvox, Cymbalta, etc. Throughout all of them, I was on the road to recovery. Some just worked better than others at treating my symptoms."

She ends the commentary by telling women: "You will find the right medication for you, and you will get better."

Evelyn Pringle is a columnist for Scoop Independent News and an investigative journalist focused on exposing corruption in government and corporate America. Article sponsored by the Baum, Hedlund, Aristei & Goldman law firm.