Motherhood has fallen prey to the psycho-pharmaceutical complex. If new legislation known as the Mother's Act becomes law, the drugging of infants through pregnant and nursing mothers will no doubt increase.

Congress has rightfully refused to pass this bill for eight years. The official title is currently the "Melanie Blocker Stokes Mom's Opportunity to Access Health, Education, Research, and Support for Postpartum Depression Act of 2009." 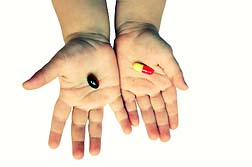 The legislation was introduced in the House during the 110th Congress on January 4, 2007, by Illinois Democrat Bobby Rush and later reintroduced into both bodies of the new Congress in January 2009, after the bill died in the Senate last year.

Democratic Senator Robert Menendez from New Jersey, home to a large number of drug companies, and Richard Durbin (D-IL) are the main sponsors of the bill in the Senate.

In a March 30, 2009 speech on the House floor, Congressman Rush identified the target of this piece of legislation when he claimed that, "60 to 80 percent of new mothers experience symptoms of postpartum depression while the more serious condition, postpartum psychosis, affects up to 20 percent of women who have recently given birth."

After the House voted to pass the legislation on that day, the Congressman stated: "H. R. 20 will finally put significant money and attention into research, screening, treatment and education for mothers suffering from this disease."

Enough cannot be said about the ability of anyone with a white coat and a medical title to convince vulnerable pregnant women and new mothers that the thoughts and feelings they experience on any given day might be abnormal.

The constant watching and barrage of questions such as are you depressed, are you anxious, are you moody, are you fearful of motherhood, are you sleeping well, are there changes in your eating habits, will predictably have the net effect of convincing many women that normal thoughts and emotions are a sign of mental disorders.

"The Mothers Act has the net affect of reclassifying the natural process of pregnancy and birth as a mental disorder that requires the use of unproven and extremely dangerous psychotropic medications (which can also easily harm the child). The bill was obviously written by the Big Pharma lobby and its passage into law would be considered laughable except that it is actually happening."

While mania, psychosis, agitation, hostility, anxiety, confusion, depression and suicidality are often cited as "symptoms" of mental illness, many of the same exact "symptoms" are listed as side effects on the warning labels for antidepressants, antipsychotics and anticonvulsants.

All of these drugs are now being prescribed to treat the "mood" and "anxiety" disorders that women will be screened for if the Act becomes law. In the case of pregnant women, no psychiatric drug has been FDA approved as safe for use.

The newly recruited customers will be stigmatized for life with labels of the most serious forms of mental illness simply because they are unlucky enough to become pregnant in the United States, where serious disorders lead to major profits from the prescribing of multiple classes of psychotropic drugs.

On September 1, 2008, Medical News Today ran a headline for a study that stated: "Americans Show Little Tolerance For Mental Illness Despite Growing Belief In Genetic Cause." The study by University of Pennsylvania sociology professor Jason Schnittker showed that while more Americans believe that mental illness has genetic causes, the country is no more tolerant of the mentally ill than it was 10 years ago.

In an article for AlterNet on June 18, 2008, Dr Bruce Levine, author of the book, "Surviving America's Depression Epidemic," explains how the psycho-pharmaceutical cartel works. "Mental health treatment in the United States is now a multibillion-dollar industry," he reports, "and all the rules of industrial complexes apply."

"Not only does Big Pharma have influential psychiatrists... in their pocket, virtually every mental health institution from which doctors, the press, and the general public receive their mental health information is financially interconnected with Big Pharma."

More Pregnancy Pharmaceutical News
"The American Psychiatric Association, psychiatry's professional organization, is hugely dependent on drug company grants, and this is also true for the National Alliance for the Mentally Ill and other so-called consumer organizations."

"Harvard and other prestigious university psychiatry departments take millions of dollars from drug companies, and the National Institute of Mental Health funds researchers who are financially connected with drug companies."