The 8th anniversary of the September 11th tragedy in New York City served as a reminder that social security disability issues remain for hundreds, if not thousands of Americans continuing to be affected by 9/11 years after the fact. SSDI benefits are hard to come by at the best of times, often only with the aid of an SSDI attorney. 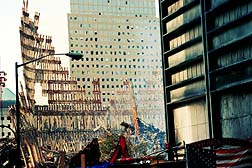 Much has been written about the heroic efforts of police officers and firefighters who either lost their lives, or became permanently disabled as a result of 9/11. However there were others who were affected by the disaster, beyond the thousands who died and the loved ones left behind.

Thousands of area residents who were exposed to the toxic cocktail of burning jet fuel, asbestos dust and other environmental hazards unleashed in the airspace over lower Manhattan are having increasing health concerns even now. The New York Dispatch reported yesterday that 71,000 people have come forward to have their health monitored. So far 10,5000 residents have received federally funded treatment for health problems stemming from the World Trade Center disaster.

And then there are the individual stories.

John Feal worked for 43 hours straight that first day at Ground Zero. The young man from Long Island labored for several days at the site until September 17th, when an 8,000-pound steel beam landed on his left foot and sliced it in half.

As a supervisor for a demolition contractor, Feal did not benefit from the various health, disability and pension benefits enjoyed by firefighters and law enforcement personnel. As a subcontractor to three different companies, Feal was stonewalled for workers' compensation.

More SOCIAL SECURITY DISABILITY News
He lost his own health insurance when he was no longer able to work, and had to resort to selling off his cars and furniture to help pay for the some 30 surgeries over five years needed to repair his foot. Twice he went to court to prevent foreclosure on his home and his credit score plummeted.

His social security disability benefits were finally approved in 2004. It took nearly three years to see his SSDI benefits.

There are many more who share the same plight. More than 100 studies since 9/11 have determined that, beyond rescue personal who suffer from post traumatic disorder but by and large were outfitted with protective gear, the tens of thousands of residents, passersby and volunteers who labored at Ground Zero without protection face not only debilitating health issues, but the bureaucratic slowness of SSDI.
READ ABOUT SOCIAL SECURITY DISABILITY LAWSUITS

Posted by
Harold Fox
on October 15, 2013
I was at 9/11 as a NYC Detective for almost 1 1/2 years looking for bodies and seeing them coming out of the hole.I moved out of the city when I retired in 2008 because I lived by JFK airport and could not take the planes.I get angry at the sight of construction equipment,I can not hold a job anymore.Their are other things going on but I have never been to a doctor,to proud.I do not know if you can help me.