More News
In a move that borders on irony, an inmate at the Cook county correctional facility is suing the sheriff's office after sustaining a slip and fall injury due to alleged negligence from jail personnel. 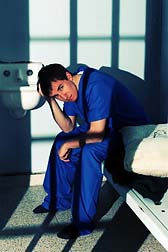 The victim, Toshiba Williams, was assigned to kitchen duty while serving time at the cook county jail. This past July, while the petite woman was carrying a large pot of hot oatmeal she slipped and fell spilling the contents of the pot across her face and leaving permanent burns and scars according to ChicagoNow.com.

Williams, who is only five feet tall and weighs less than 100 pounds, claims that she slipped on an accumulation of grease scattered across the kitchen floor. The suit charges that choosing such a small woman to perform such a physically demanding and dangerous task in what has proved to be an unsafe work environment is egregious negligence.

To determine if the prison officials are indeed liable in the accident, William's slip and fall attorney will have to prove that the jail staff knew of the slippery condition of the floor and thus needlessly placed the woman in danger by providing an unsafe work space.

Posted by
Lewis Adam Wallace Jr
on November 22, 2019
I was at rowan county jail for a few hours for a simple assault. Well they came to my enclosed Holden department and said it was time to go. I thought cool. I grabbed my box with my blankets and headed toward the door 50ft away. Well 25 ft in to my walk, I slipped and fell really fast and hard. I had on jail house flip flops, and I stepped right into a puddle of water and fell all kinds of different ways. Because this has happened in a sheriffs office "jail" after around 6 calls to different lawyers, none has wanted to take my case. I find that very unprofessional. After being release I went to the hospital and back to the sheriffs office to make sure there was a report filled, as which there was. Im pending a MRI Tomorrow 11/23/2019

I Really could use a real lawyer that's out for doing the right things. That sees all our soldiers that is dyeing for the hope of people to do the right things out here.

Posted by
Lisa Duncanson
on May 25, 2013
On around about feb 2012 In pinellas county. I was in jail when I first came in I spoke to the deputies that I cant sleep on the top bunk. But that I had to. And as I was getting up on the bunk I fell from the top bunk. And I hit my had on the brick walls. They only gave me motrin. sent me back to my bunk. They did take pictures. The reason why Requiring an attorney is after coming home I t went to the hospital. THe doctor said I had an concussion. And now im having some problems: Seizures, slurred speach, dizziness, migraines.