Amiodarone and Simvastatin Anything But a Dynamic Duo 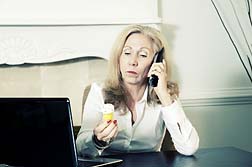 However, according to an article recently published in Cardiology Today, it was in 2002 that the FDA first sounded the warning bells over a potential interaction between simvastatin and amiodarone. Since then, interactions are up, despite increased awareness and revised prescription information.

Writing in the August 1 issue of Cardiology Today, Professor Patricia A. Howard PharmD, FCCP, BCPS notes that the use of simvastatin has increased over time, given its increased availability in generic form, together with the adoption of simvastatin as the preferred statin by hospital formularies and third-party insurance providers.

Howard, who is also Vice Chair of Pharmacy Practice at the University of Kansas Medical Center, School of Pharmacy in Kansas City, notes that most patients tolerate statins well, "and the risks for severe muscle toxicity and rhabdomyolysis are low." That said, there are various factors that will affect the overall risk, including concomitant therapy with potentially interacting drugs.

"The risk appears to be significantly increased when simvastatin doses greater than 20 mg daily are used in patients receiving other drugs that inhibit the CYP3A4 isoenzyme, such as amiodarone. When the need for aggressive lipid lowering necessitates the use of higher simvastatin doses, an alternative regimen should be considered."

More AMIODARONE AND SIMVASTATIN News
Over the years, amiodarone has morphed into a routine prescription for the treatment of atrial fibrillation, arrhythmia and other common heart conditions. However it is worth noting that when the FDA finally approved amiodarone in 1985, it did so with reluctance, given initial reports that showed increased incidence of serious pulmonary side effects. The FDA still advocates that amiodarone be used by the same criteria under which it was originally approved—for more severe disorders and then only as a treatment of last resort.

Lawsuits accuse the various amiodarone manufacturers of downplaying the risks and side effects of amiodarone. The increased use of statins and the combination of amiodarone and simvastatin, together for the risk for rhabdomyolysis, only exacerbates the problem.

If you have suffered losses in this case, please send your complaint to a lawyer who will review your possible [Amiodarone and Simvastatin Lawsuit] at no cost or obligation.
Request Legal Help Now