Rochester Meat Recall: Meat Producers Will Pay, But Is It Enough?

A proposed federal budgetary measure is aimed at financing increased testing at meat packing plants--such as Rochester Meat--and hopefully reducing E.coli contamination in the food you eat. It's part of a long-overdue US Department of Agriculture (USDA) response to last year's record recalls of over 30 million pounds of E. coli-tainted ground beef and this year's very early Rochester Meat recall of 188,000 pounds of tainted products.

The measure proposes a new set of licensing fees for meat packing plants in the fiscal 2009 budget. If approved by Congress, these fees will generate $92 million of an estimated $96 million needed to pay for increased inspections by USDA's Food Safety and Inspection Service (FSIS). The remaining $4 million would come from additional fees charged to companies that require further testing or product recalls. Agriculture Undersecretary Richard Raymond commented, "Every other facility in this country that can impact your health or any other person that can impact your health has to have a license. Meat packing plants bear some responsibility to pay for part of their inspection fee." 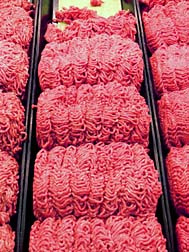 The measure is somewhat good news in that it would place at least some of the burden for increased FSIS inspections where it reasonably belongs—on the companies that profit from meat products. It's not so great news in that it doesn't go far toward addressing FSIS' already overstretched and under-budgeted resources. At least part of the motive behind the measure may be to avoid biting the bullet and allocating enough funds to actually protect you from contaminated meat products like those that were sold by Rochester Meat and a host of other producers.

More News
Richard Raymond, we should note, is also one of the government officials named by attorney Ray Marler during the Rochester Meat recall for "playing a dangerous game" with consumer health. Raymond refused to name the national restaurant chain that received contaminated Rochester Meat products, despite repeated calls from Marler and others. He still maintains a stony silence on that question.

Perhaps also the loud proclamations about this relatively small measure hope to mask the other news—which is that FSIS doesn't do all that well in the overall USDA budget. For 2009, FSIS is budgeted at $952 million, a $22 million increase over 2008, not a huge increase for a beleaguered service, and just slightly over one percent USDA's overall budget of nearly $95 billion. That doesn't buy a lot of improvement in keeping e. coli out of the food you buy and eat.

In plain English, either figure represents chump change, which is completely consistent with the past few years' rigid and fanatical demonizing of "government regulation" as the root of all evil—even when it's meant to protect your own and your children's health.