A Train Accident, A Death and a Lifetime of Pain

For one man, his life was over in an instant. For another, a life became bedeviled with chronic pain from a lifetime of work with the railroad. For both, railroad worker safety has been an issue for rail workers for more than hundred years—ever since 1908 when railroad worker deaths and train accidents fostered the creation of the Federal Employers' Liability Act (FELA).

It remains an issue to this day, and especially for the family of Craig Lang, age 41, of Neola Iowa. 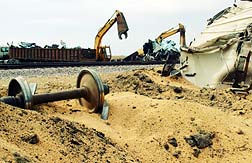 This past Wednesday the Union Pacific employee would have awakened to the intrusion of the alarm clock, and to the welcoming smell of coffee wafting through his abode like any other day. And he would have walked out his front door in the pre-dawn darkness with the expectation of walking back through later that day. Perhaps amidst thoughts of his family, or of the Superbowl game on Sunday.

But the railroad is not a safe place to work, as the rail forefathers of a hundred years hence foretold with FELA. And Wednesday Lang had been, or was continuing to work on a train when he was suddenly struck and killed by a train heading in the opposite direction.

The accident happened January 28th at about 6am in Council Bluffs. A spokesperson for Union Pacific indicated that Lang was employed as a switchman, and died at the scene.

Norm Chapper is another employee of Union Pacific. And while Mr. Chapper is still in the land of the living, his life is plagued with pain. At least that's the allegation, resulting from a repetitive trauma injury he claims to have incurred by working at various jobs with Union Pacific over the years.

Chapper's lawsuit, filed December 29th in Jefferson County District Court, claims that his injuries were incurred while working as a conductor, brakeman, switchman, fireman and engineer in the transportation department of Union Pacific Railroad Company.

He claims the injury happened because of the negligence of Union Pacific Railroad Company, who failed to provide Chapper with a safe place to work and failed to comply with industry standards.

"Specifically, but without limitation, the area where Mr. Chapper suffered his injury was not in compliance with federal track regulations concerning ballast and other track components," the suit states. "Moreover, the equipment he was provided violated the Safety Appliance Act, the Boiler/Locomotive Inspection Act and accompanying federal regulations."

Chapper's injury affected his leg, knees, lower extremity and other parts of his body, the suit states.

Because of Chapper's injury, he claims he suffered physical pain, suffering, mental anguish and lost earnings and benefits.

He also experienced physical impairment, incurred medical expenses and suffered disfigurement, according to the complaint.

It is cases like Chapper's and the tragic death of Lang earlier this week that point to the risks associated with a lifetime of working around trains. And those risks are just as real now, as they were 101 years ago when FELA was created.

More RAILROAD News
Last year FELA celebrated its 100th anniversary. The centennial celebrations now past, the organization heads into its 101st year with a mandate and viability plainly demonstrated by a continuation of railroad worker deaths, and concern for railroad worker safety that is just as evident today, as it would have been with the train accident of yesteryear.

The railroad can be a dangerous place to work. Trains are massive behemoths that can snuff out a life in a heartbeat. Injuries either incurred in an instant or over a period of years, can alter lives. Rail workers need such protections as that which FELA affords, and the legal options available, to ensure that medical bills don't ruin a family…or when a family is in need of sustainable care, when the breadwinner fails to come home…

If you have suffered losses in this case, please send your complaint to a lawyer who will review your possible [Railroad Lawsuit] at no cost or obligation.
Request Legal Help Now