LAWSUITS NEWS & LEGAL INFORMATION
Home Page >> Feature Articles >> PPH: Get a Check-Up Before it's Too Late

PPH: Get a Check-Up Before it's Too Late

Doctors believe that Primary Pulmonary Hypertension (PPH) is on the rise. And judging from the amount of PPH class action lawsuits [filed], so does the legal profession. PPH is one of the most insidious of illnesses because it can take up to ten years or more to be diagnosed: people who took diet drugs such as Fen Phen or Redux in the 1990s are suffering the consequences now. In fact you could have PPH and not know it.

PPH is described as "a rare blood vessel disorder in which the pressure in the pulmonary artery (the blood vessel between the heart and lungs) rises above normal leading to heart enlargement and failure." But it's about time the word 'rare' is removed from that definition—thousands of people have developed PPH and the makers of Fen Phen and other diet drugs have paid them millions of dollars in settlements. 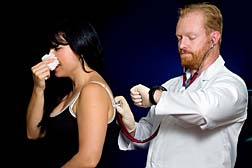 However, many people have never heard of PPH but have all the symptoms—and they took diet drugs in the 1990s.

Charlene Robinson is one of those people. She took Fen Phen for about six months in the late 1990s to lose weight. It did the job but a few years later she started to have a chest pains. "About two months ago, I read an article in a magazine about diet drugs such as Fen-Phen causing PPH," says Charlene. "It listed the exact same symptoms as I have been suffering from and it was just too much of a coincidence. All these years I was wondering what caused my chest problems and to me, it is now obvious."

There is no heart disease in 44-year-old Charlene's family and other than her weight problem, she was healthy. "I started getting a shortness of breath, almost like anxiety attacks," says Charlene.

More News
"I told my doctor about this and he said it was exactly that—anxiety. But I never bought into this diagnosis. He prescribed Paxil. Of course my chest pains never went away. Since then I have had CAT scans, heart catheterization, MRIs—-in other words, a whole battery of tests over the years.

I am currently seeing a cardiologist. He says it is neurogenic syncope, which means an electrical problem in the heart and in my case it is the left valve. As well, I suffer from uncontrollable high blood pressure and swelling in my legs and the left side of my body.

I read that people have died from PPH and it seems scary to me—all these things that can happen so many years later. I am going to see my cardiologist again this Monday for another heart catheterization and a chest x-ray, and to discuss PPH."